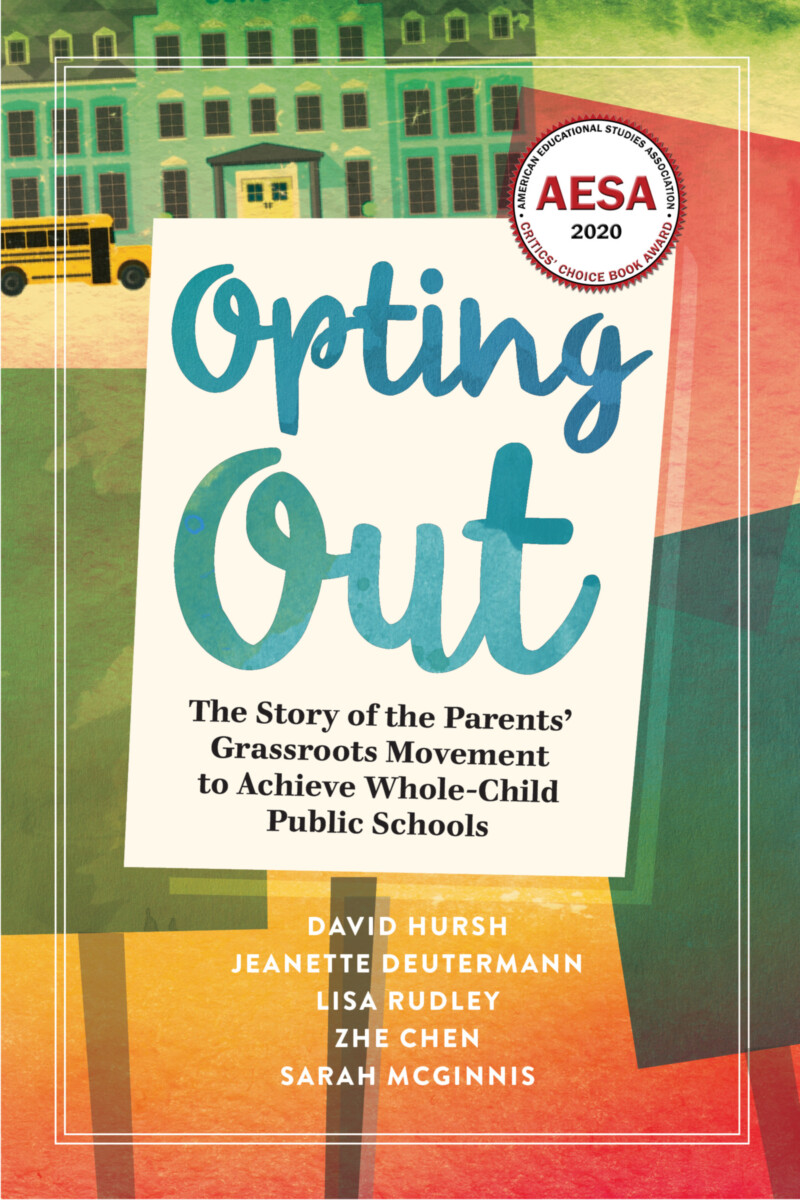 The rise of high-stakes testing in New York and across the nation has narrowed and simplified what is taught, while becoming central to the effort to privatize public schools. However, it and similar reform efforts have met resistance, with New York as the exemplar for how to repel standardized testing and invasive data collection, such as inBloom. In New York, the two parent/teacher organizations that have been most effective are Long Island Opt Out and New York State Allies for Public Education. Over the last four years, they and other groups have focused on having parents refuse to submit their children to the testing regime, arguing that if students don’t take the tests, the results aren’t usable. The opt-out movement has been so successful that 20% of students statewide and 50% of students on Long Island refused to take tests. In Opting Out, two parent leaders of the opt-out movement—Jeanette Deutermann and Lisa Rudley—tell why and how they became activists in the two organizations. The story of parents, students, and teachers resisting not only high-stakes testing but also privatization and other corporate reforms parallels the rise of teachers across the country going on strike to demand increases in school funding and teacher salaries. Both the success of the opt-out movement and teacher strikes reflect the rise of grassroots organizing using social media to influence policy makers at the local, state, and national levels.

“I am pleased to endorse this very important and informative book about the origins, the goals, and the accomplishments of the parent-led Opt Out Movement in New York. The public needs to know why parents like Jeanette Deutermann and Lisa Rudley devoted their time to fighting the testing regime. It needs to know how pointless the tests are. It needs to understand how a small group of parents, without financial support, were able to persuade the parents of about 200,000 students to join them in refusing to submit their children to tests that lasted for hours and had no diagnostic value whatever for the students. They and the other leaders of this movement are heroes of our age.”

“Opting Out documents one of the most important movements in education today. It helps us answer a crucial question: Can communities act back against the standardized testing regimes that dominate our schools? By centering the voices of community members who are actively engaged in acting back against these policies and practices, Opting Out provides us with a sense of real possibilities.”

Michael W. Apple, University of Wisconsin, Madison, author of The Struggle for Democracy in Education

“The Opt-Out movement has achieved unimaginable success given the pressure many schools place on parents to submit their child for testing. This parent led grass-roots movement is driven by dissatisfaction with educational reforms that rely on test-based accountability, and with the increased role of ‘edu-businesses’ and corporations in schools. This powerful book highlights the power of moms organizing with educators to push back against the state to take back our schools and re-establish the purpose of schools for democracy.”

“Faced with a truly awful testing regime in schools, and with policy makers not listening, New York State’s fledging Opt Out organisations seemed to have little chance. This book recounts, often drawing on the authors’ personal experiences, how they mobilised and turned the tide. Crucially, Opt Out not only resisted but also sought to articulate progressive alternatives. We need such accounts of contesting neo-liberal educational reforms more than ever. A really inspiring and informative book for all who fight for public education around the globe.”

“…the authors have crafted a compelling activist’s handbook that parents, teachers, and other educational stakeholders will find useful as they set out on similar activist journeys. Importantly, it can offer hope in the face of resistance… I agree with the authors that “the opt-out movement can provide a model for how to work politically to develop more democratic, humane and equitable educational institutions and society” (p. 22). Anyone interested in seeking that future will find Opting Out helpful, inspiring, and informative.”

Chapter Two: The Rise of High-Stakes Testing and the Opt-Out Movement: A Brief History

Chapter Five: Beyond the Opt-Out Movement: Current Challenges and the Future

David Hursh began fighting for democratic schools when he was a university undergraduate, much of which is described in High-stakes Testing: The Decline of Teaching and Learning. He has written over 100 journal articles and book chapters on topic including social studies, teaching about environmental health, action research, and higher education.

Jeanette Deutermann is the founder of Long Island Opt Out and co-founder of NYS Allies for Public Education. She has been named on the Long Island Press top 50 Power List in 2014, 2015, 2016, and 2017, and has received “Woman of Distinction,” “Woman Trailblazer,” and Bellmore/Merrick Central HS “Friend of Education” awards.

Lisa Rudley is a founding member and volunteer executive director of NYS Allies for Public Education (NYSAPE). She currently lives in Briarcliff Manor, New York, with her family. She serves as the President of the Ossining School District board and is a Senior Account Executive at Passport for Good. Lisa holds an MBA from Fordham University.

Sarah McGinnis earned her bachelor’s degree in Education from Houghton College and completed her Masters in Teaching and Curriculum at the University of Rochester. She has worked to gather (research/ stories/data) around the opt-out movement in New York State.