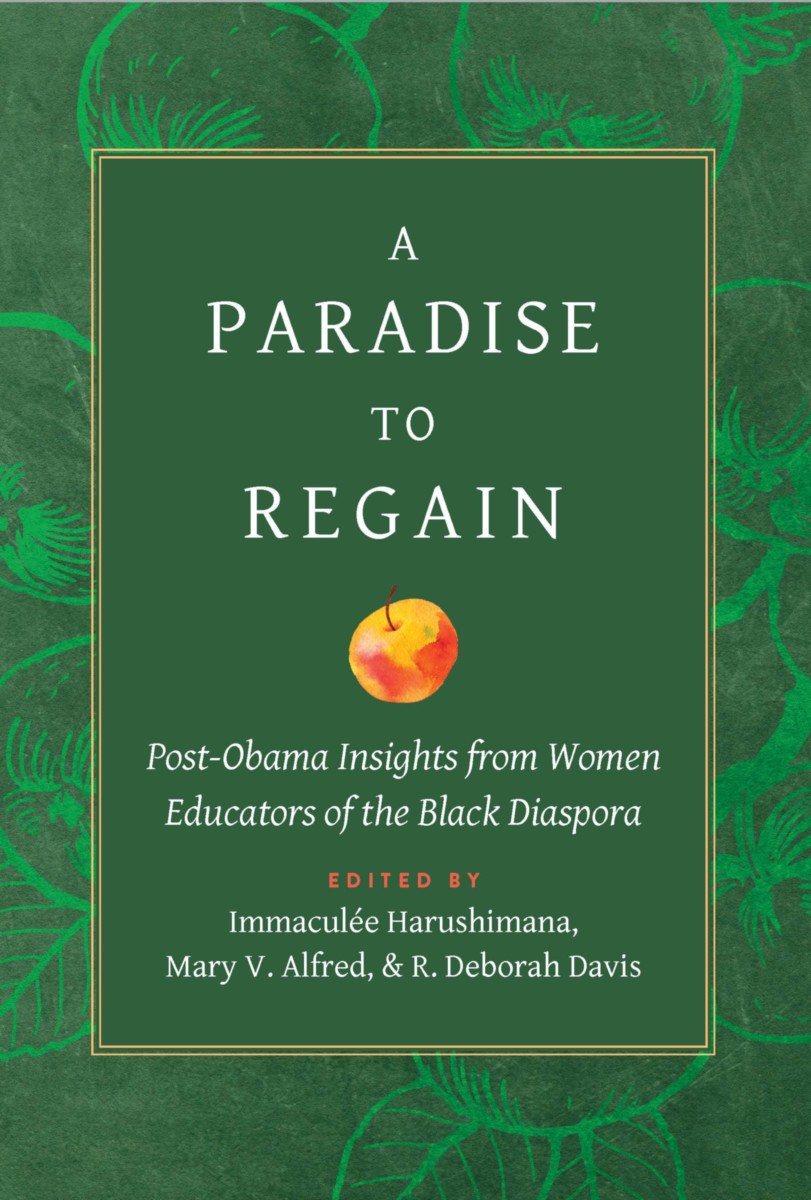 A Paradise to Regain

Post-Obama Insights from Women Educators of the Black Diaspora

The history of presidential politics reached a new and significant milestone with the election of Barack Obama in 2008. It sparked great hope in America for greater racial equity and social justice. A Paradise to Regain: Post-Obama Insights from Women Educators of the Black Diaspora seeks to avert the likelihood of erasure of President Obama’s legacy of hope and possibility that every child, regardless of race, faith, and gender affiliation, can dream big and live to see his/her dream turn into reality. As women educators of color, we all agree that the socio-political climate prevailing in the United States of America, since the aftermath of the 2016 election, requires unprecedented agency. The book provides space for Black women educators–African Americans, Naturalized Black Americans, and Foreign-born Blacks from Africa, the Caribbean Islands and South America (e.g., Guyana)–to have a candid conversation with their young children—sons and daughters, nephews and nieces—about the roadblocks they are likely to face as minority youth of color in their pursuit of greatness and the reminder that they have a role model in President Obama to look up to in moments of extreme frustration and exasperation. Voices of engaged educators of color are indispensable to make sure that children understand that that despite a 360-degree turn from eight consecutive years of a reassuring message that “change had come,” that paradise had been gained, into the threatening message of “making America white again,” we count on them to regain the paradise.

“A compelling reason to read this collection of essays about surviving the impact of a racist and divisive culture that has threatened the prosperity of generations of black and non-white citizens for centuries is its clarion call to all who support and participate in the efforts to emancipate adults and children from mental slavery. Documenting the commitment and strenuous efforts of black authors to overcome the harsh reality of the 'nuisance factor' (p. 21, Graves, 1998), this book is a must-read for those who wish to learn about the realities of life in the post-Obama era in these United States.”

“As the title suggests, this volume offers a rich “paradise” from Black women’s insights into and from the Black Diaspora. At the same time, there is a nuanced detailing of the loss of paradisal conditions for women leaders and educators historically and in our contemporary post-Obama era. Focusing on teacher education and several sociology fields, these chapters offer a range of storied, artistic, poetic, political, historical, and personal accounts that highlight valuable possibilities to remember, reclaim, and re-imagine legacies and “narratives of hope.”

“In this book, expert and powerful voices deliver impactful and encouraging messages, particularly to those of us who are still trying to figure out our space and place at home, on the streets, in the classroom, on campuses, in politics, and yes, in the world.”

“In Paradise to Regain, the paradoxes of the American Dream and the promise of inclusiveness are counterposed against painful exclusion from the full benefits of citizenship, from the mainstream, from leadership, and from equitable access to economic, political and social resources in general. The authors weave a tapestry that tells an intersectional story of the implications of race, class, and gender in the contemporary USA. The book provides an important critique of the status quo and presents some alternative visions of possible futures without sugarcoating. The message that runs through it is that Paradise can be regained, but only through determined, focused, collective struggle. This book is a great contribution to academic and popular analysis and explication of the past and present gendered challenges faced by racial and ethnic minorities in the USA.”

"Throughout this volume, the diverse voices of female scholars, educators, mothers, and immigrants from across the Diaspora challenge us to reflect on our cultural heritage – where and how we fit in to this critical time in history. The writings demand that we consider how we can actively create multifaceted opportunities for ourselves and our communities moving forward. Yes We Can!"

SECTION I
THE BURDEN OF LEADING WHILE BLACK
1. “They’re Coming for Our Jobs Too!” Double Standards for Black and White Leadership in the Age of Obama and Trump
Rosaire Ifedi

5. Teaching through the Lens of a Mother
Josephine Jarpa Dawuni

SECTION II
GENDER EQUALITY AND WOMEN EMPOWERMENT
6. Gender Equality Not of This World: In the Brave New World
Lindamichelle Baron

9. Teaching Adult Learners of Color in a Time of Struggle: The Impact on Children
Jaye Jones

12. “Talking Some and Leaving Some”: A Community-Grounded Approach to Teaching and Sustaining African Languages in America
Esther Milu

13. When Being Articulate Isn’t Enough: The Narrative of a French-Speaking African Woman Faculty of English
Immaculée Harushimana

14. Can You Get It If You Really Want? A Jamaican-Born Science Educator Reflects on Success Attainability
Ellie Williamson

15. Beware of False Consciousness: A Letter to My Son
Shirley Mthethwa-Sommers

17. “Yes, I Can; Yes, We Can!” Reflections of a Caribbean Immigrant Sistah in the Struggle with a Legacy of Determination, Strength, and Empowerment
Mary V. Alfred

18. Writing Ourselves into History: Examining a World of Black Imaginings and Possibility
Tracy Cook-Person, with Djenaba Dekkatu and Quincy Merrill

19. On Being a Biracial Woman of Black and Puerto Rican Descent: A Mother Reflects on a Mother-Daughter Conversation
Patricia Isaac

22. Dreams for My Son: Dreaming Big in America
Faith Muturia

23. Dreams Shattered and Restored: President Barack Obama Confronting the
Shadow of Absent Fatherhood and the Pursuit of a Healthy Relationship
Faith N. Maina

26. Yes, She Did: Following Queen Mother Sanford Wherever She May Go
Lindamichelle Baron

27. As Long as There Is Life: Elections That Shaped My Transnationality
Immaculée Harushimana

29. Supporting the Village That Raises the Children: From the Perspective of a Community Advocate
Patricia Mason

Immaculée Harushimana is a 2018-2019 Fulbright Scholar (Malawi) and Associate Professor of TESOL and English education in Lehman College, City University of New York. Her major area of inquiry is in critical linguistics and its implications for literacy instruction to adolescents in a globalized world. The underlying theme of Harushimana’s research is linguicism as reflected through African-born immigrants’ academic and professional integration, multilingual identities, and alternative discourses. Harushimana’s research and writings have been published in edited volumes and refereed professional journals. Her books include Reprocessing race, language and ability: African-born educators and students in transnational America (2013), which brings together the experiences of African-born teacher educators, k-12 teachers and secondary youth in the USA and Canada. Her 2016 book African immigrants’ experiences in American schools: Complicating the race discourse, co-authored with Dr. Shirley Mthethwa-Sommers, explores the effect of intersecting issues of race, nationality, and spirituality on the schooling adaptation of African-born children in western school settings. Currently, Harushimana is lead editor and contributor to her third book entitled, Paradise to Regain: Post-Obama Insights from Women Educators in the Diaspora, under contract with Myers Education Books (2019).

Mary Alfred is Professor of Adult Education in the College of Education and Human Development (CEHD) at Texas A&M University. She is the Executive Director of the Texas Center for the Advancement of Literacy and Learning (TCALL), the statewide professional development and resource center for adult and literacy education providers in the state of Texas. Her research interests include women of color in STEM, international adult education, sociocultural contexts of immigration and adult learning, social welfare and economic disparities among low-income and low-literate adults, and issues of diversity and equity in higher education and in the workplace. She received her Ph.D. in Education Administration with a focus in Adult Education and Human Resource Development Leadership from the University of Texas at Austin.

R. Deborah Davis is a Full Professor Emeritus from State University of New York at Oswego, School of Education in Curriculum & Instruction where she has taught Culturally Relevant Teaching and Foundations of Education courses for the past seventeen years. Dr. Davis earned her Doctorate (1996) in Higher Education Administration from Syracuse University, MPA (1991) S U, and BA (1988) from Columbia College, Missouri. Served as the Diversity Coordinator, School of Education; Director of Teacher Opportunity Corps grant (NYS Dept of Ed - 2008-2011; 2011-2014; 2014-2017); Member – Oswego Project SMART Professional Development team with the Syracuse City School District until her retirement in January 2017. Continues to volunteer as the Community representative at Van Duyn Elementary School.