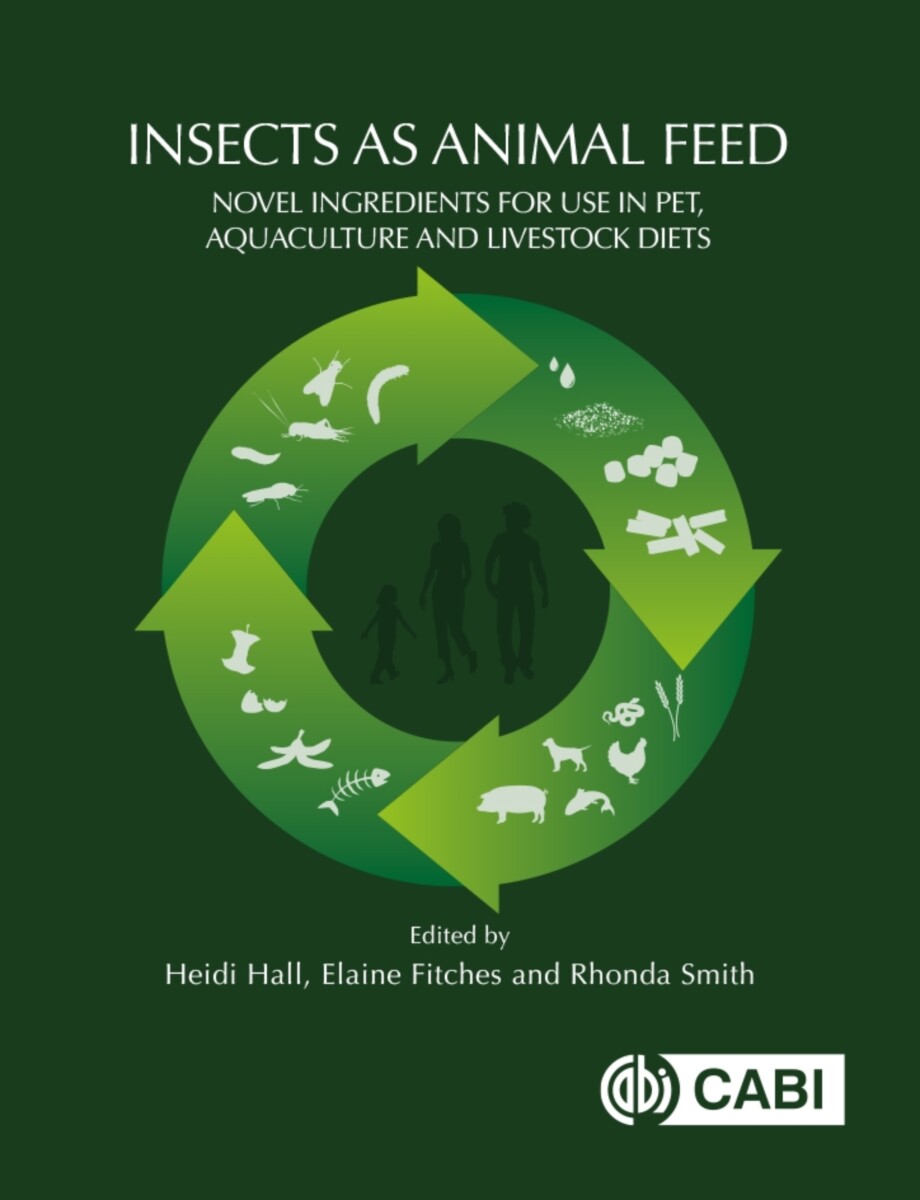 Novel Ingredients for Use in Pet, Aquaculture and Livestock Diets

The global drive towards sustainability and improved animal health means there is a greater need for development of novel functional ingredients for the feed industry. As the requirements for animal protein for livestock feed and human consumption grows, the use of insect products as animal feed has been gaining increasing attention.

Covering global production systems of insect protein, oil and chitin, as well as the co-products from this industry, this book:

Including a focus on sustainable practices such as waste valorization, this book takes a holistic approach as to how insects could contribute to the sustainability of livestock production on a global scale. Providing an up-to-date reference for research scientists, nutritionists and veterinarians, as well as prospective insect farmers, it will also interest those with a broader curiosity towards climate change, sustainability and the circular economy.

Heidi Hall, Global Technical Services Manager for Anpario plc, a UK specialized animal feed additive company. Graduated from the University of Leeds with BSc Hons Zoology degree in 2011 and joined the technical team at AB Agri ltd as a Commercial Nutrition Graduate. She later progressed from General Nutritionist with ABN (a division of AB Agri) to the Technical Project Manager for the Alternative Proteins division. Her latter role focused on developing novel proteins for the livestock industry, and Heidi worked on a number of insect research projects including leading the UK Innovate project between AB Agri and FERA Science, where she met Elaine, the EU PROteINSECT project (on the advisory board) and the Danish led inVALUABLE project. The editors have jointly published two peer-reviewed papers on Insect production, nutritional parameters and the value of insect protein in poultry diets.

Heidi has individually authored papers on gut health in swine and recently been awarded a Nuffield Scholarship looking at strategies to maximize gut health and therefore reduce the need for antimicrobials.

Dr. Elaine Fitches is an Associate Professor at the Department of Biosciences, Durham University, UK. She is an applied entomologist with interests focused in the field of insect biotechnology, and has led research in projects investigating the potential use of insects for livestock nutrition.

As scientific coordinator of “PROteINSECT,” a EU funded program that investigated the potential of insects as a source of protein for animal feed, this multinational and multidisciplinary program provided scientific evidence that made a significant contribution towards the revision of legislation to allow insect protein to be used as a feed in aquaculture in 2017. She recently co-led the creation of an Insect Biomass Conversion Task & Finish Group Consensus document providing the evidence base to support the generation of an insect farming sector in the UK, which was submitted to the Agricultural Productivity Working Group in April 2019. Elaine has considerable experience in biochemistry, molecular biology and invertebrate physiology and has co-authored more than 50 scientific papers and 2 book chapters.

Rhonda Smith, a graduate of the University of Kent with a joint honors degree in History & Politics, later achieved an MA in Managing Change from the Open University. Working first in magazines and later book publishing as a Commissioning Editor, Rhonda moved to newspapers setting up books divisions with journalists both in the UK and USA. Head hunted to develop a European healthcare public relations agency, she grew the company ready for takeover by a global competitor. That exit enabled Rhonda to set up her own company Minerva which specializes in providing communication, dissemination, and training services for European and national funded research projects in the fields of agritech, bioeconomy, circular economy and sustainability as well as providing strategic support for UK based companies and organizations. Rhonda led Minerva’s role in the EU funded PROteINSECT project to develop the PRO-Insect Platform, engage with KOLs from industry, NGOs, animal feed, and veterinary fields and EU policy to develop a Consensus Business Case document on which the White Paper – "Insect Protein: Feed for the Future" – was developed and published. It was launched at a Reception in the European Parliament followed by the PROteINSECT International Conference.