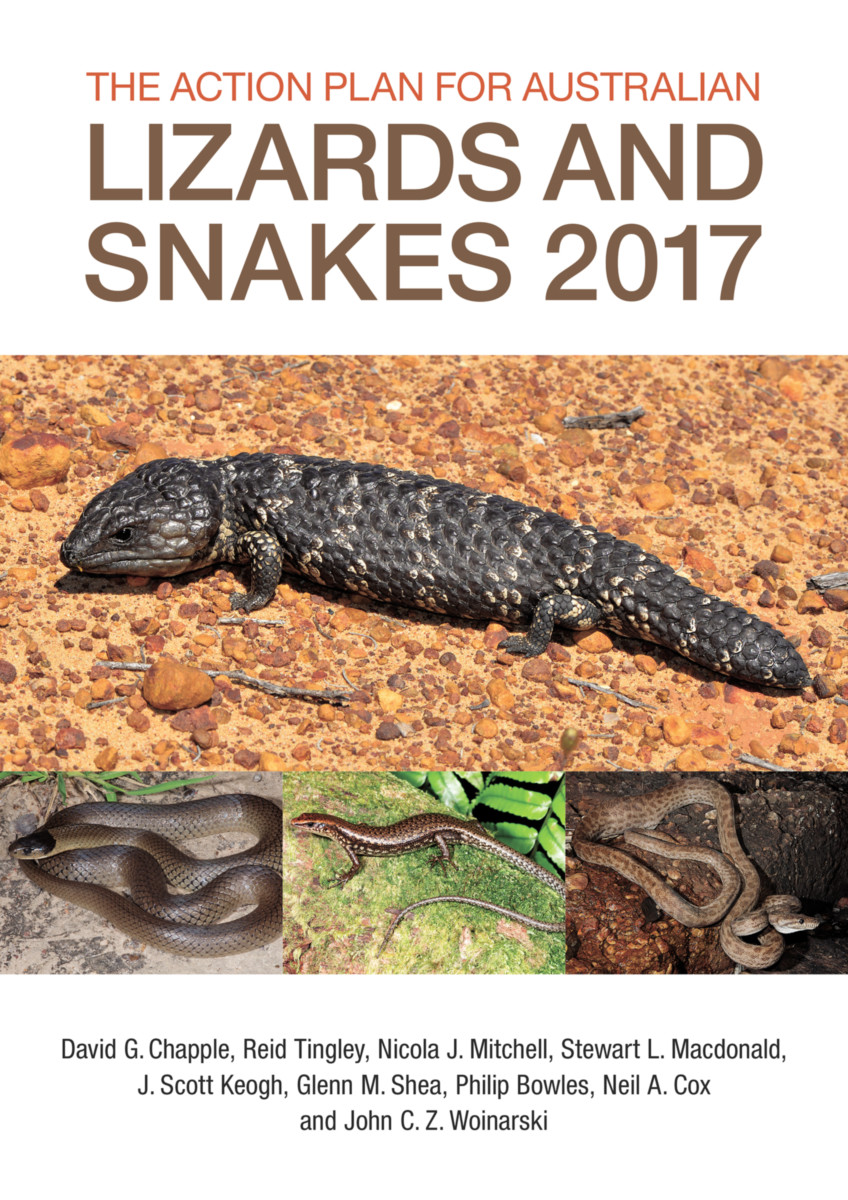 Lizards and snakes (squamate reptiles) are the most diverse vertebrate group in Australia, with approximately 1000 described species, representing about 10% of the global squamate diversity. Squamates are a vital part of the Australian ecosystem, but their conservation has been hindered by a lack of knowledge of their diversity, distribution, biology and key threats.

The Action Plan for Australian Lizards and Snakes 2017 provides the first comprehensive assessment of the conservation status of Australian squamates in 25 years. Conservation assessments are provided for 986 species of Australian lizards and snakes (including sea snakes). Over the past 25 years there has been a substantial increase in the number of species and families recognized within Australia. There has also been an increase in the range and magnitude of threatening processes with the potential to impact squamates. This has resulted in an increase in the proportion of the Australian squamate fauna that is considered Threatened. Notably over this period, the first known extinction (post-European settlement) of an Australian reptile species occurred – an indication of the increasingly urgent need for better knowledge and management of this fauna. Six key recommendations are presented to improve the conservation management and plight of Australian squamates.

Foreword
Summary
About the authors
Acknowledgements
About our sponsors
1. Introduction
2. Conservation status assigned to all Australian lizard and snake species
3. Twenty-five years of change in the Australian squamate fauna
4. Taxon profiles
Appendix 4.1. Draft assessments for species described between the 2017 workshops and August 2018
5. Conclusions
References
Index

David Chapple is an evolutionary ecologist whose research focuses on the ecology, evolution, conservation and macroecology of lizards, particularly skinks. His research group at Monash University investigates the evolutionary ecology of environmental change and studies both the species that expand (invasive species) and contract (threatened species) their distributions in response to human-induced environmental change. His research has focused on the lizard fauna of Australia, New Zealand and Lord Howe Island. He has organized IUCN assessment workshops for Australian and New Zealand reptiles, freshwater fish and plants. David is the Chair of the IUCN SSC Skink Specialist Group and a member of the IUCN Conservation Genetics Specialist Group.

Reid Tingley is a quantitative ecologist with an interest in the processes governing extinctions and invasions of amphibians and reptiles. He has developed model-based assessments of reptile extinction risk and was a key contributor to the IUCN Australian squamate assessment. He is currently employed as a lecturer at Monash University.

Nicola Mitchell is a conservation physiologist based at The University of Western Australia, whose research group investigates how species such as sea turtles, terrestrial-breeding frogs and tuatara could adapt to climate change. Recent publications discuss emerging options for managing threatened species, such as assisted colonization and assisted gene flow. Nicki is a current member of the Commonwealth Threatened Species Scientific Committee, which provides advice to the Australian Minister for the Environment and Energy on listing threatened species, ecological communities and threatening processes. She co-leads a national program on fauna translocations in the Threatened Species Recovery Hub and is the immediate past president of The Australian Society of Herpetologists.

Stewart Macdonald is an ecologist who has had a lifelong love of reptiles. His varied research interests have seen him work on climate change adaptation, spatial ecology, conservation and the impacts of feral animals. He is currently a Research Fellow at James Cook University.

Glenn Shea, Senior Lecturer in Veterinary Anatomy at The University of Sydney, has been researching the systematics and biology of Australian and New Guinean reptiles, and particularly the skink and pygopod lizards and typhlopid snakes, since the 1980s. He is a Research Associate of the Australian Museum and the Queensland Museum, and his studies, which emphasize the use of museum collections throughout the world, have resulted in over 180 publications, including co-authorship (with Gerry Swan and Ross Sadlier) of the Field Guide to Reptiles of New South Wales. He is a past member of the Non-Indigenous Animals Advisory Committee of NSW Agriculture, a past Treasurer of the Australian Society of Herpetologists, and editor of the Australian herpetological journal Herpetofauna. He was involved with the first Action Plan for Australian Reptiles (1993), and a member of the first Australasian Reptile and Amphibian Specialist Group of the IUCN SSC (1991–94).

Philip Bowles trained as a tropical ecologist and taxonomist and has biodiversity survey and research experience working on amphibians, reptiles and several insect groups in Australia, South-east Asia, Madagascar and South America. His work and research interests are focused on documenting and understanding how species and communities – particularly amphibians and reptiles – respond to anthropogenic disturbance. Since 2010 he has been employed by IUCN as a Programme Officer, leading extinction risk assessments for reptiles and amphibians across the world. Since 2011 he has managed the Global Reptile Assessment, an ongoing effort to produce Red List assessments for every species of reptile on the planet. He has been the Coordinator of the IUCN Species Survival Commission’s Snake and Lizard Red List Authority since it was founded in 2011.

Neil Cox is the Manager of the joint IUCN–Conservation International Biodiversity Assessment Unit. He has played a lead role in over 20,000 global assessments for amphibians, mammals, marine systems, freshwater systems and the Global Reptile Assessment. Neil also focuses on priority site identification for conservation (Key Biodiversity Areas) and is helping IUCN and partners with guidance on the integration of biodiversity targets into major landscape restoration activities.

John C. Z. Woinarski is a Professor of Conservation Biology at Charles Darwin University. He has been engaged in research, management and policy relating to Australian biodiversity for over 40 years. He is the author of A Bat's End, a co-author of Cats in Australia and The Action Plan for Australian Lizards and Snakes 2017, and co-editor of Recovering Australian Threatened Species.