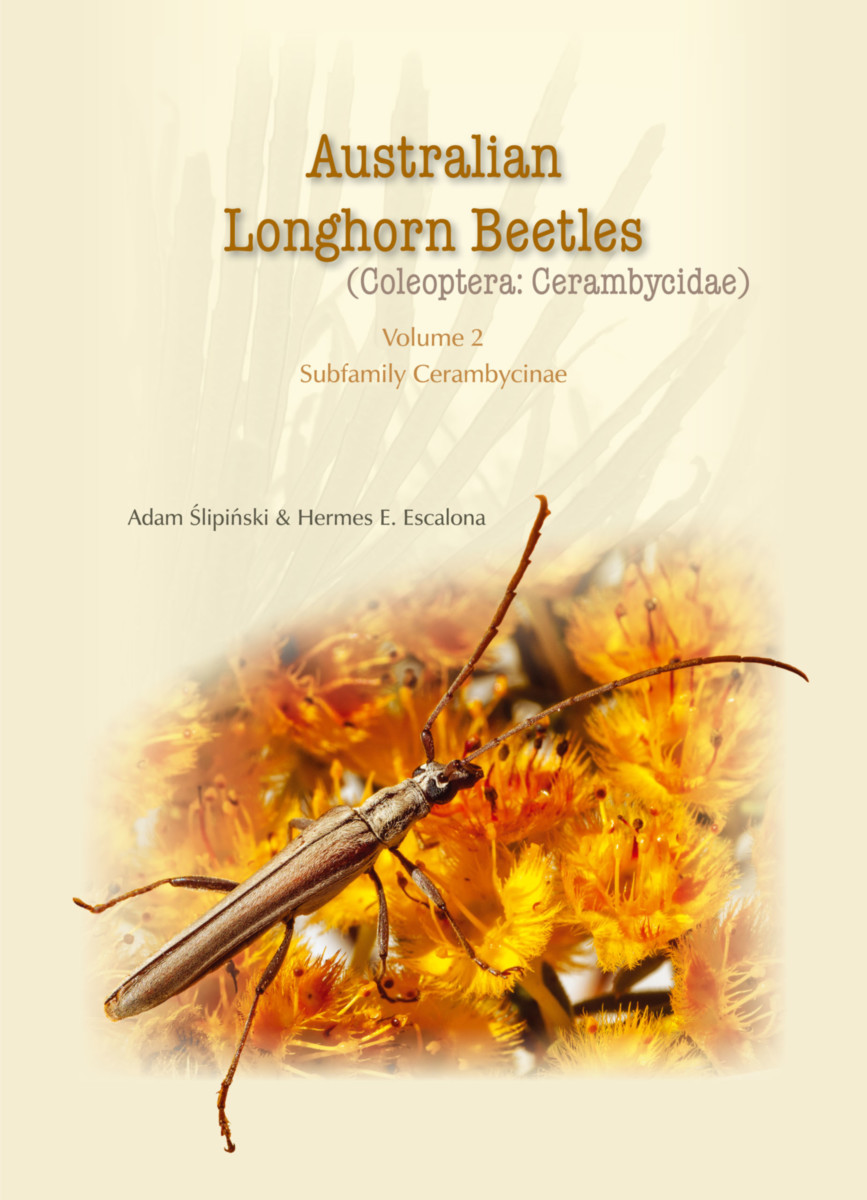 Longhorn Beetles — Cerambycidae are one of the most easily recognized groups of beetles, a family that worldwide encompasses over 33 000 species in 5200 genera. With over 1400 species classified in 300 genera, this is the sixth largest among 117 beetle families in Australia.

These beetles often attack and kill living forest or orchard trees and develop in construction timber (like the European House borer, introduced to WA), causing serious damage. Virtually all Cerambycidae feed on living or dead plant tissues and play a significant role in all terrestrial environments where plants are found. Larvae often utilize damaged or dead trees for their development, and through feeding on rotten wood form an important element of the saproxylic fauna, speeding energy circulation in these habitats. Many species are listed as quarantine pests because of their destructive role to the timber industry.

This second of three volumes on Australian Longhorn Beetles covers the taxonomy of genera of the Cerambycinae, with comments on natural history and morphology. One hundred and forty-two Cerambycinae genera are diagnosed and described, an illustrated key to their identification is provided, and images illustrate representatives of genera and of actual type specimens.

A full listing of all Australian species with synonymies and bibliographic citations is also included.

Adam Slipinski completed his PhD and DSc in Poland where he worked for 20 years at the Museum and Institute of Zoology of the Polish Academy of Sciences, Warsaw; he also held a joint appointment as Professor of Biology at the University of Zielona Gora. He is currently working as a Senior Principal Research Scientist and curator at the Australian National Insect Collection, CSIRO. He is the author of nearly 200 research publications, the editor of a two-volume book on the phylogeny and classification of beetles, and an author of books on Australian ladybird and longhorn beetles. Adam’s research concentrates on the phylogeny and higher classification of beetles.

Hermes Escalona earned his PhD in Entomology from the Universidad Central de Venezuela in 2012. He is interested in systematics, evolution, and historical biogeography of Coleoptera, with a current focus on Longhorns beetles (Cerambycidae) and small beetle families within Cucujiformia.