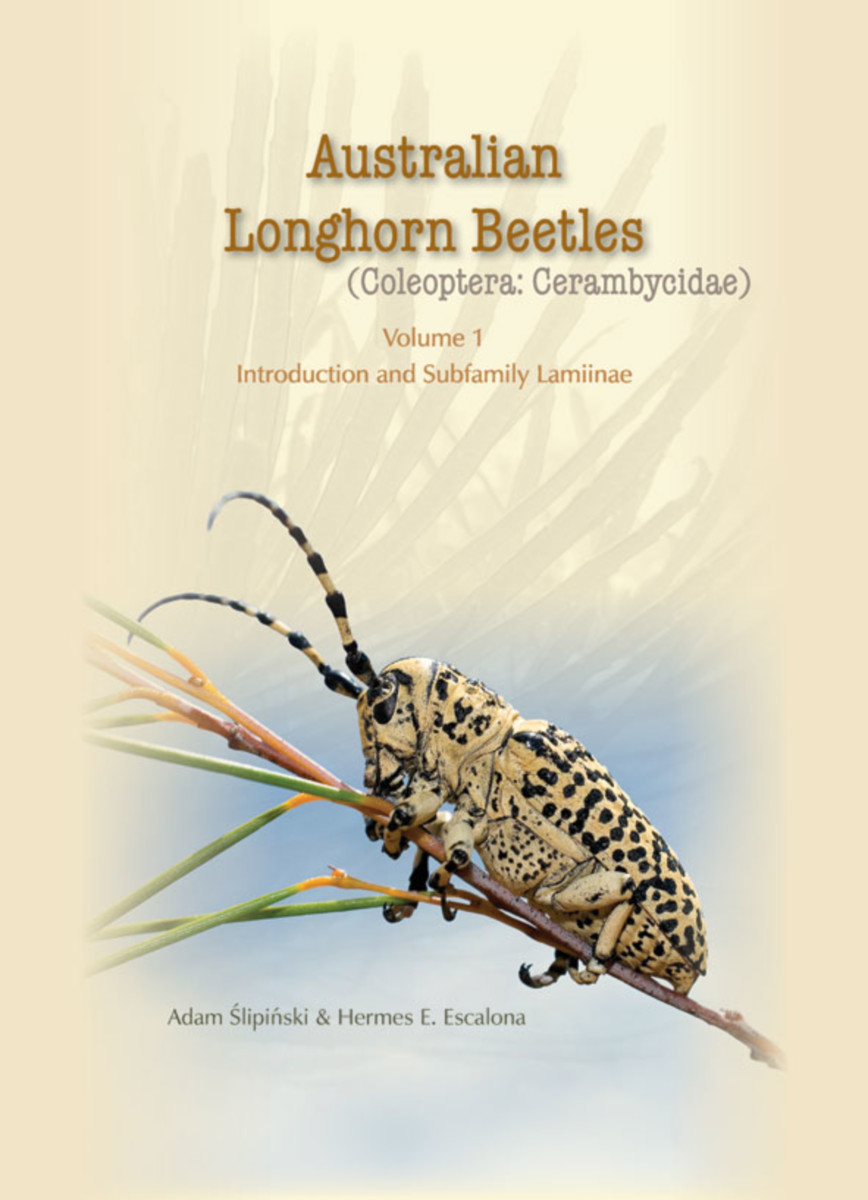 Longhorn Beetles (Cerambycidae) are one of the most easily recognized groups of beetles, a family that worldwide encompasses over 33,000 species in 5,200 genera. With over 1,400 species classified in 300 genera, this is the sixth largest among 117 beetle families in Australia.

Virtually all Cerambycidae feed on living or dead plant tissues and play a significant role in all terrestrial environments where plants are found. Larvae often utilize damaged or dead trees for their development, and through feeding on rotten wood form an important element of the saproxylic fauna, speeding energy circulation in these habitats. Many species are listed as quarantine pests because of their destructive role to the timber industry.

This volume provides a general introduction to the Australian Cerambycidae with sections on biology, phylogeny and morphology of adult and larvae, followed by the keys to the subfamilies and an overview of the 74 genera of the subfamily Lamiinae occurring in Australia. All Lamiinae genera are diagnosed, described and illustrated and an illustrated key to their identification is provided. A full listing of all included Australian species with synonymies and bibliographic citations is also included.

Winner of the 2014 Whitley Medal

"In this first volume of CSIRO's ambitious effort to produce a definitive reference to the longhorn beetles of Australia, Slipinski (Australian National Insect Collection, CSIRO) and Escalona (Central Univ. of Venezuela; CSIRO) introduce the family Cerambycidae, one of the largest families of Australian beetles, and provide a detailed account of the subfamily Lamiinae (so-called flat-faced longhorns). The text is profusely illustrated with high-quality photographs of adults, larvae, and pupae, including scanning electron micrographs and macrophotographs of cleared and dissected specimens. This book will be of enormous value to graduate students in entomology and academic/museum staff working with longhorn beetles. Advanced undergraduates studying entomology may find material of interest for their research projects. Summing Up: Recommended."

“This book will be valued by amateur collectors, professional systematists, and personnel of state and federal agencies who are charged with identifying beetles that have been intercepted in international quarantine. Moreover, any true fan of longhorned beetles will cherish this volume for it stunning collection of images, which in my view qualifies it as not only an excellent reference, but even as a fascinating coffee-table book that will be appreciated even by non-entomologists. The eye-catching front cover, showing a beautiful beetle perched on a twig, would entice anyone to pick up the publication, and thumbing through it they will be struck by the great diversity of species, and fascinating variation in form and coloration, within this one subfamily of the longhorned beetles."

Adam Slipinski completed his PhD and DSc in Poland where he worked for 20 years at the Museum and Institute of Zoology of the Polish Academy of Sciences, Warsaw; he also held a joint appointment as Professor of Biology at the University of Zielona Gora. He is currently working as a Senior Principal Research Scientist and curator at the Australian National Insect Collection, CSIRO. He is the author of nearly 200 research publications, the editor of a two-volume book on the phylogeny and classification of beetles, and an author of books on Australian ladybird and longhorn beetles. Adam’s research concentrates on the phylogeny and higher classification of beetles.

Hermes Escalona earned his PhD in Entomology from the Universidad Central de Venezuela in 2012. He is interested in systematics, evolution, and historical biogeography of Coleoptera, with a current focus on Longhorns beetles (Cerambycidae) and small beetle families within Cucujiformia.

Sample pages and photos
   Request A
OR