Dominic Belmonte served the Golden Apple Foundation for Excellence in Teaching as its Director of Teacher Preparation from 1996-2006 and its President and Chief Executive Officer from 2006-2017. He was named a Golden Apple Award recipient in 1987. He served as Distinguished Professor of Practice at National Louis University, Chicago and taught English at York Community High School in Elmhurst, Illinois. In 1989, he co-created the Golden Apple Scholars of Illinois Program, a pre-induction advanced teacher preparation program that has to date brought over 2000 young people to teaching careers in Illinois. In 1996, he co-created the GATE (Golden Apple Teacher Education) program, Illinois’ first alternative pathway to the standard teacher certification, which brought over 400 mid-career adults to Chicago classrooms, where they taught secondary math or science or elementary school children. He is the author of Teaching from the Deep End (2nd ed.) and Teaching on Solid Ground. Dom earned his B.A. and M.A. in English at the University of Illinois at Chicago and was conferred Honorary Doctorates in Humane Letters from St. Xavier University (2011) and from National Louis University (2017). 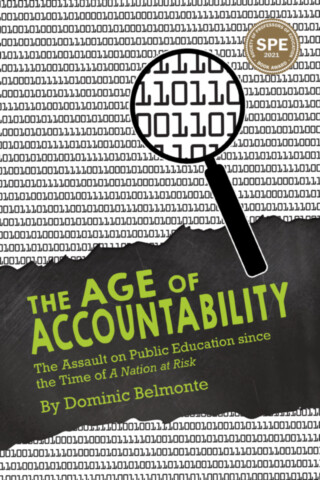 The Age of Accountability