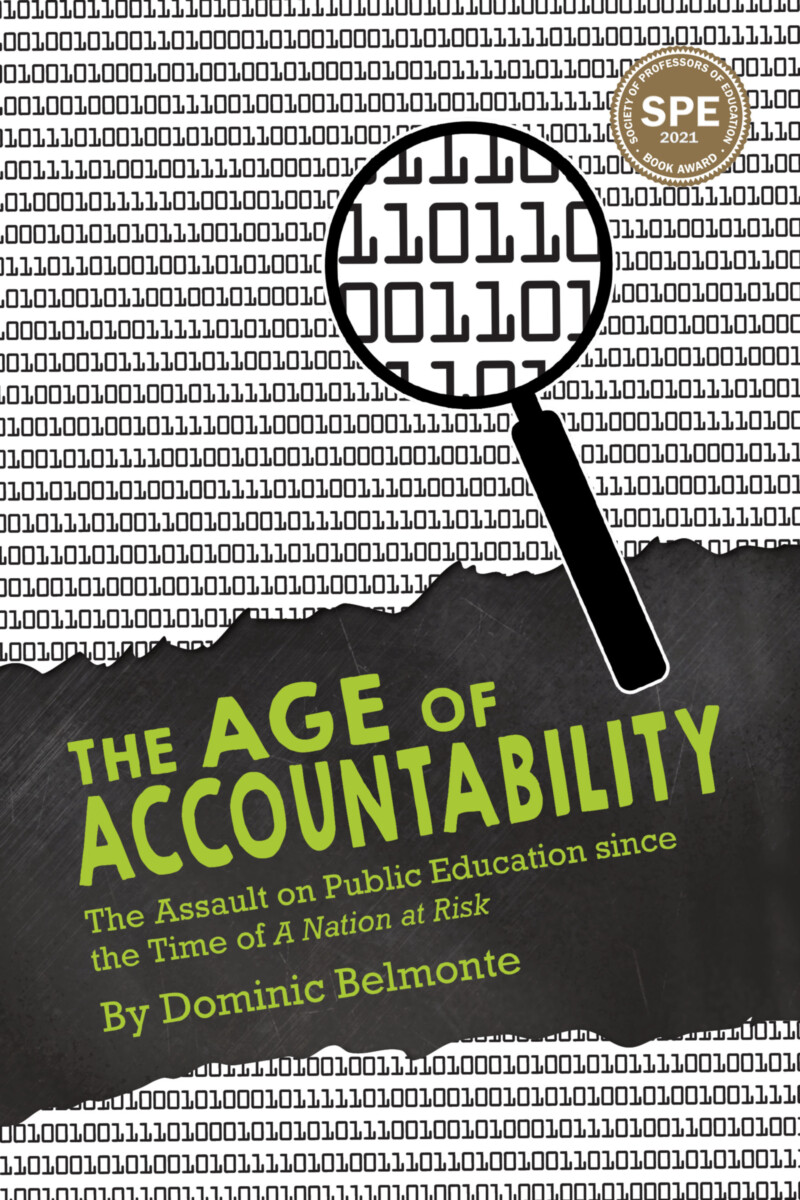 The Age of Accountability

It’s clear that American public education has been under assault for more than the last 30 years. So much of this current "age of accountability" has focused on blame, both of teachers and those who prepare them. Somehow, unlike in other professions, declarations were made to the effect that anyone could teach better than teachers, including business leaders and people from tony universities without teacher preparation.

The Age of Accountability scrutinizes the attack on teachers through weaponized data. While an effective corporate tool to improve bottom-line goals, its use in education became more sinister and misanthropic. International PISA scores imply the mediocre ability of American students, fueling a belief that American education needed more than an upgrade. The only answer that would placate many was a complete upheaval, a redefinition of a teacher and who should be permitted to become one. We teachers ceded authority to these business and legislative forces. Their subsequent fervor for testing overwhelmed teaching and drove the joy out of schooling for students. It is time for a recounting of what has been done to the profession and to our children. Young teachers need encouragement and veteran teachers need reminding of their valiant and effective efforts.

“Dominic Belmonte, in his book, The Age of Accountability: The Assault on Public Education since the Time of A Nation at Risk, reminds us with pith and vigor that education cannot be reduced to a test or a score. He emphatically urges us not to indict an entire profession and allow business paradigms to be applied indiscriminately to a profession that is an art and science, requiring specialized training, mentoring, and coaching – a profession deserving of great respect. He urges us not to allow those who are not in the profession to summarily dismiss a system comprised of many strengths and capable of adapting to new challenges. The Age of Accountability is a must read for anyone who wants to understand the perspective of the educator – our most valued stakeholder serving our children. Dominic Belmonte, a consummate professional educator to the core and the leader of the Golden Apple for over a decade articulates this perspective better than anyone.”

“Dominic Belmonte is a teacher’s teacher, and his calling has led him into classrooms at every level as well as into the halls of power where policy is crafted and determined. He’s been a life-long student of, as well as a key actor in, the history of education for decades, and his intimate knowledge of the enterprise has maintained its own true north—this unique child, an unruly spark of meaning-making energy on a journey of discovery and surprise, and this particular teacher struggling to listen systematically to children and families, and working to see children fully, beyond their test scores and anemic statistical profiles. The Age of Accountability brings Belmonte’s hard-fought wisdom into the public square—an important intervention in the national dialogue about where we must go from here if our goal is to teach free people to fully participate in our shared world.”

Bill Ayers, Author of "To Teach: The Journey, in Comics"

“Dom Belmonte has courageously reflected on the demise of teacher preparation and professionalism in America. A former teacher himself, coupled with having the longest tenure as President of the Golden Apple Foundation, he eloquently tells the story of how society and politics have victimized teachers. Once the most noble of professions, Dom describes how America’s quest for accountability has ironically made it even more difficult for the public to recognize teaching as a true profession. This is a must read for administrators, professors, policy wonks and, of course, teachers.”

“Dominic Belmonte has brought perspective, experience, and insight to what may be the most pivotal period in the history of American education. His careful and piercing analysis of what followed No Left Child Behind is an important addition to the current discussions about school reform. It is most likely that only an educator such as Belmonte, who saw what was happening in education from a front row seat, could give us this clear picture. The combination of his first-hand experience with his knowledge of the theory, policies, and governmental actions makes The Age of Accountability required reading for everyone concerned about education in the 21st Century.”

“In The Age of Accountability, Dom Belmonte immerses readers in a captivating narrative of the 'slings and arrows' inflicted on education by the series of national policies starting with the Reagan administration’s Nation at Risk warning and carrying through the top-down decrees associated with No Child Left Behind and other manifestations of political usurpation of teachers’ freedom to teach. As an intensely fierce advocate for teachers, Dom synthesizes his 20 years of high school teaching experience, his leadership credibility as the CEO Emeritus of the teacher-developing Golden Apple Foundation, and his articulate erudition as a classics scholar, all voiced as a battle cry to restore teachers respect and their rights to exercise professional practice in the classroom.”

“Not everything that counts can be counted, as Albert Einstein wrote on his blackboard, and not everything that can be counted counts. Dominic Belmonte makes the case that we have trapped our students, our teachers, our administrators and our parents into a sticky web of endless data, which provides a smokescreen substitute for the real work of teaching: the painstaking, loving, messy business of building a relationship between teacher and student. The more reliance we place on 'measurement of student progress,' the more the curriculum will be molded into that which is most easily measured. And therein lies the peril.”

“Dom Belmonte has spent decades tirelessly working to improve, and advocating for, public schools and their teachers. In this book, he turns his watchful eye to the upside-down world of reform that has prescribed, stifled, and stunted teaching and learning in too many of our nation’s class-rooms over the past 30-plus years. If we are to take back our schools from the data-crunchers, it is voices like Belmonte’s that point the way forward.”

Gregory Michie, author of "Same as It Never Was"

Chapter 2: What Echoes On

Chapter 4: The Coarsening of Our Discourse

Chapter 7: Impact on the Profession

Chapter 10: Arrows Aimed at Academia and the Archers Admired

Chapter 12: Hey, You Want to be Finnish? Then Listen to the Finns!

Chapter 13: The Wane of Reading in Favor of the Testable

Chapter 14: Here’s an Idea: Take the Best Teachers and Kill Them with Work!

Chapter 15: The Attack on Tenure

Chapter 16: Contemporary Disruptors to the Classroom Experience: The Computer and the Assailant

Chapter 17: America, Where Everyone Holds an Idea About Teaching

Dominic Belmonte served the Golden Apple Foundation for Excellence in Teaching as its Director of Teacher Preparation from 1996-2006 and its President and Chief Executive Officer from 2006-2017. He was named a Golden Apple Award recipient in 1987. He served as Distinguished Professor of Practice at National Louis University, Chicago and taught English at York Community High School in Elmhurst, Illinois. In 1989, he co-created the Golden Apple Scholars of Illinois Program, a pre-induction advanced teacher preparation program that has to date brought over 2000 young people to teaching careers in Illinois. In 1996, he co-created the GATE (Golden Apple Teacher Education) program, Illinois’ first alternative pathway to the standard teacher certification, which brought over 400 mid-career adults to Chicago classrooms, where they taught secondary math or science or elementary school children. He is the author of Teaching from the Deep End (2nd ed.) and Teaching on Solid Ground. Dom earned his B.A. and M.A. in English at the University of Illinois at Chicago and was conferred Honorary Doctorates in Humane Letters from St. Xavier University (2011) and from National Louis University (2017).

Confronted by budgets that have been decimated, the likelihood of many students not taking up acceptances, and uncertainties about when and how to re-open campuses, to name some of the daunting issues we are facing, how do we begin to plan and think strategically about purpose, priorities, and resources?

We’re offering a free White Paper to you as a leader of your institution, school, or unit to get you started on the vital process of self-assessment, planning, and strategy formulation to address the challenging times ahead.