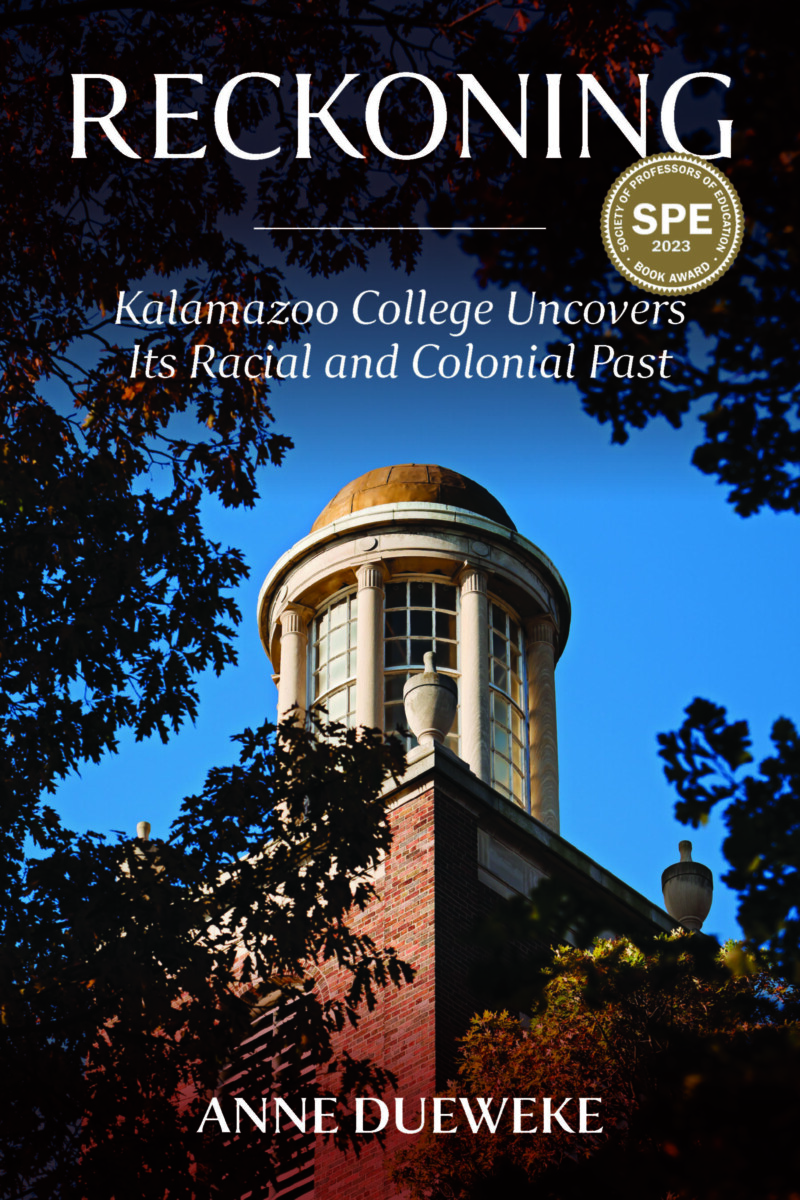 Kalamazoo College Uncovers Its Racial and Colonial Past

At a time when many individuals and institutions are reexamining their histories to better understand their tangled roots of racism and oppression, Reckoning: Kalamazoo College Uncovers Its Racial and Colonial Past tells the story of how American ideas about colonialism and race shaped Kalamazoo College, a progressive liberal arts institution in the Midwest. Beginning with its founding in 1833 during the era of Indian Removal, the book follows the development of the college through the Civil War, the long period of racial entrenchment that followed Reconstruction, minstrel shows performed on campus in the 1950s during the rise of the Civil Rights movement, Black student activism in the wake of Martin Luther King’s assassination, the quest for multiculturalism in the 1990s, and the recent activism of a changing student body. This close look at the colonial and racial history of one institution reveals academia’s investment in White supremacy and the permutations and contradictions of race and racism in higher education. Though the details are unique to Kalamazoo, other predominantly White colleges and universities would have similar historical trajectories, for in the end our institutional histories reflect the history of the United States. By examining the ways in which a progressive, midwestern college has absorbed, resisted, and perpetuated American systems of colonialism and racism, the book challenges higher education to use this moment to make the deep, structural changes necessary to eliminate disparities in experiences and outcomes among students of color and their White peers. Reckoning is a volume that can be used in a variety of courses that deal with topics such as History of Education, Social Justice in Higher Education, and more.

“Kalamazoo College has been a center of social justice teaching and leadership training for decades. Anne Dueweke’s excellent new book reminds us of that practice, but she also reveals that few long-standing institutions, including K College, are untouched by the legacies of racism and colonialism. An important case study of the political and ethical issues facing college campuses in the 21st century.”

Barbara Ransby, John D. MacArthur Chair and Professor at University of Illinois at Chicago, and author of the award-winning biography, "Ella Baker and the Black Freedom Movement"

“Reckoning is the fascinating story of the nearly two centuries history of Kalamazoo College, viewed through the powerful lens of White privilege. It is the story of trying to reconcile lofty ideals with the stark realities of racism. And it is an unfinished story because we don’t know whether Kalamazoo College will ultimately succeed in achieving its social justice goals. Reckoning shows us the importance of taking time to reflect on what has gone before so that we can contemplate what is yet to come. It should be required reading for all who profess a renewed commitment to dismantling structural racism.”

“Dueweke traces the history of Kalamazoo College’s origins in settler colonialism and its evolution to the cusp of America’s current racial reckoning. Without fanfare or oversentimentality, this historical case study uncovers contradictions between progress and backlash, between courageous institutional leadership and resistance to change, between grassroots activism and institutional repression. Recounting Indigenous, Black, Asian students’ experiences brings era-specific socio-political contexts to life as national politics played out within Kalamazoo. Revealing this troubled past—restores and clarifies what higher education, and particularly, the liberal arts has been—leading us to wonder what it might still become...”

“Carefully researched and passionately written, Dueweke’s history illuminates both the longstanding progressive commitments of Kalamazoo College and its enduring entanglements with colonialism, enslavement, and institutional racism. This book is a model for the kind of reckoning required of all American educational institutions if we are to truly live up to our social justice commitments.”

“Anne Dueweke reminds us that the time for reckoning is always at hand. As she traces the history of one liberal arts college, she outlines the limits of American humility and the power of visionary leadership. From the shadow of the Indian Removal Act, cast to clear the physical and social landscape, to recent efforts to listen attentively to diverse students and respond to their needs, this is a re-counting of facts that tells the full story. It does not romanticize racism, nor does it make excuses for ethnic exclusion. Reckoning: Kalamazoo College Uncovers Its Racial and Colonial Past is an act of reconciliation and redirection. By moving beyond theory to assess practices, this is a book centered on the education and evolution of humanity. It is the record of one institution finding its soul.”

Three: The Shape of Things

Four: Behind the Mask

Five: “There Is No Innocence”

Anne Dueweke worked at Kalamazoo College, her alma mater, for over twenty years. During most of that time, she served as director of faculty grants and institutional research. Other roles included director of the Academic Resource Center and director of student fellowships. Throughout her time at Kalamazoo, she served as an academic advisor to many students and was very involved in outcomes assessment and reaccreditation work. Dueweke led a number of equity and inclusion initiatives, including student focus groups on race, campus climate studies, and the committee that drafted Kalamazoo College’s first land acknowledgement statement. In 2016, she received the Outstanding First-Year Student Advocate Award, and from 2015-2021 she held a fellowship from Kalamazoo College’s Arcus Center for Social Justice Leadership. Dueweke currently works as a resource developer for the Pokagon Band of Potawatomi Indians. She lives in Kalamazoo, Michigan.