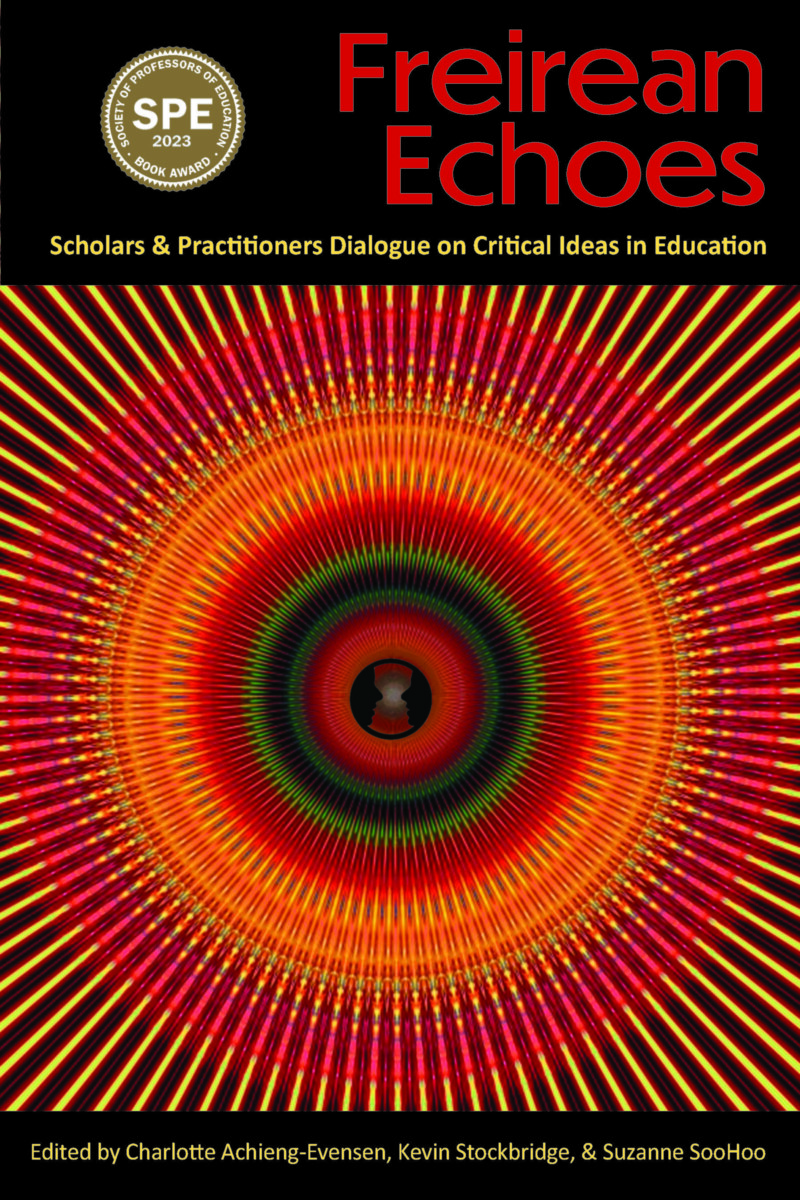 Scholars and Practitioners Dialogue on Critical Ideas in Education

How do Paulo Freire's ideas echo across time and contexts?

What does the dialogical nature of text mean for critical pedagogy today?

Inspired by Paulo Freire, this text utilizes a dialogical framework, inviting the reader into a deeper conceptual and contextual consciousness through the use of many voices. The core of this book has been stored away for several years waiting for loving students of Freire to bring it to life. The original group of lectures is a collection of speeches from keynote panelists given at a Critical Pedagogy conference in 2015 hosted by the Paulo Freire Democratic Project, Attallah College of Educational Studies at Chapman University in Orange, California. Over 200 people attended the conference coming from all parts of the world. Special guest speakers included Dr. Nita Anamaria Freire from Universidade Federal de Mato Grosso (Paulo Freire’s wife), Dr. Antonia Darder from Loyola Marymount University, Dr. Donaldo Macedo from University of Massachusetts, Dr. Peter McLaren and Dr. Tom Wilson from Chapman University. A highlight of the event was the rededication of the Paulo Freire Critical Pedagogy Archives housed in the university’s Leatherby Libraries. These archives hold Paulo’s personal notebook of study, his spectacles, instructional activity cards, and love notes to Nita. The collection also comprises original curriculum developed by Joe Kincheloe, protest posters from all over the world from Peter McLaren, paper mache puppets and curriculum developed by Alma Flor Ada and newspaper clippings and correspondences of Henry Giroux.

Freirean Echoes acts as both an archive housing the writings of these and other scholars and activists for posterity. and as a living collection, allowing for the author voices to be in dialogue with each other and with the reader. This collective “talking text” echoes, reverberates, and amplifies critical Freirean ideas, thereby inviting the reader to extend Freirean thought into their lived experiences.

“Truth be told, Freirean education is more necessary now than it has ever been. As a critical contemplation for educators to consider when re-imagining, implementing, and evaluating Freirean foundations during these unprecedented times, Freirean Echoes: Scholars and Practitioners Dialogue on Critical Ideas in Education offers contemporary, liberatory, and powerful insights that aim to uplift ideas that might otherwise be silenced by mainstream approaches to reform. This is a must-read anthology for educators and those concerned with humanization and social transformation in society and schools.”

“This stunning, intergenerational volume of speeches, inspiring vignettes and brilliantly framed questions is perfectly timed for us to celebrate Paulo Freire’s centennial year and to reflectively renew the challenge his life brings to our own praxis. Indeed, this collection lovingly compels us to share Freire’s rare and precious gift of vision that critically views and denounces oppression while inspiring us to continually see and declare the possibilities of freedom for all people. These two aspects of critical consciousness can be metaphorically compared to our physical capacity of sight which holistically unites the field of vision in both eyes into one unified perspective.”

“Freirean Echoes: Scholars and Practitioners Dialogue on Critical Ideas in Education is a magnificent book that expands the boundaries of critical pedagogy. As readers enter the dialogic space created between scholars and educators of past and present, they’ll be challenged to reflect on the power and possibility of Paolo Freire’s vision coming to life. Each chapter inspires a sense of renewal and hope that being human means recognizing that we are unfinished. This collection of essays thoughtfully celebrates what happens when distinguished authors and inquisitive readers share space reimagining education, community, and the world.”

Can Text Be Dialogic? An Introduction
Charlotte Achieng-Evensen, Kevin Stockbridge, and Suzanne SooHoo

Section One: Questions and Activity

Chapter Six
Standing on the Shoulders of Giants
Gregory Warren

Chapter Twelve
Liberation Through Love: Things Freire and My Mama Taught Me
Kimberly A. White-Smith

Charlotte Achieng-Evensen is a K-12 practitioner and academic. Currently, she serves her school district as a Teacher Specialist focusing on research, policy, program coordination, and instructional coaching. At the university level, Dr. Evensen teaches a variety of courses in teacher education. Her scholarly work is centered in the intersections of Indigenous Philosophies and colonization, culturally responsive methodologies, and K-12 teaching praxis.

Kevin Stockbridge is an Assistant Professor and Student Affairs Liaison in the Master of Arts in Teaching program at Chapman University. He is a critical educator and researcher dedicated to a radically inclusive world through engagement of democracy in the classroom and beyond. Kevin has co-edited and co-authored with scholars on several works that seek to advance and reframes transformative educational conversations for the sake of social justice.

Suzanne SooHoo is the former Endowed Hassinger Chair in Education and the co-director, emerita of the Paulo Freire Democratic Project at Chapman University, Orange, California. She is one of ten Asian American endowed chairs in the U.S. Her current research interests focuses on critical pedagogy, Freirean philosophy and culturally responsive methodologies. As a former school principal and full professor, she has committed a lifetime to understanding and nurturing relationships and engaging dialogically towards the development of a more humane and socially just world.