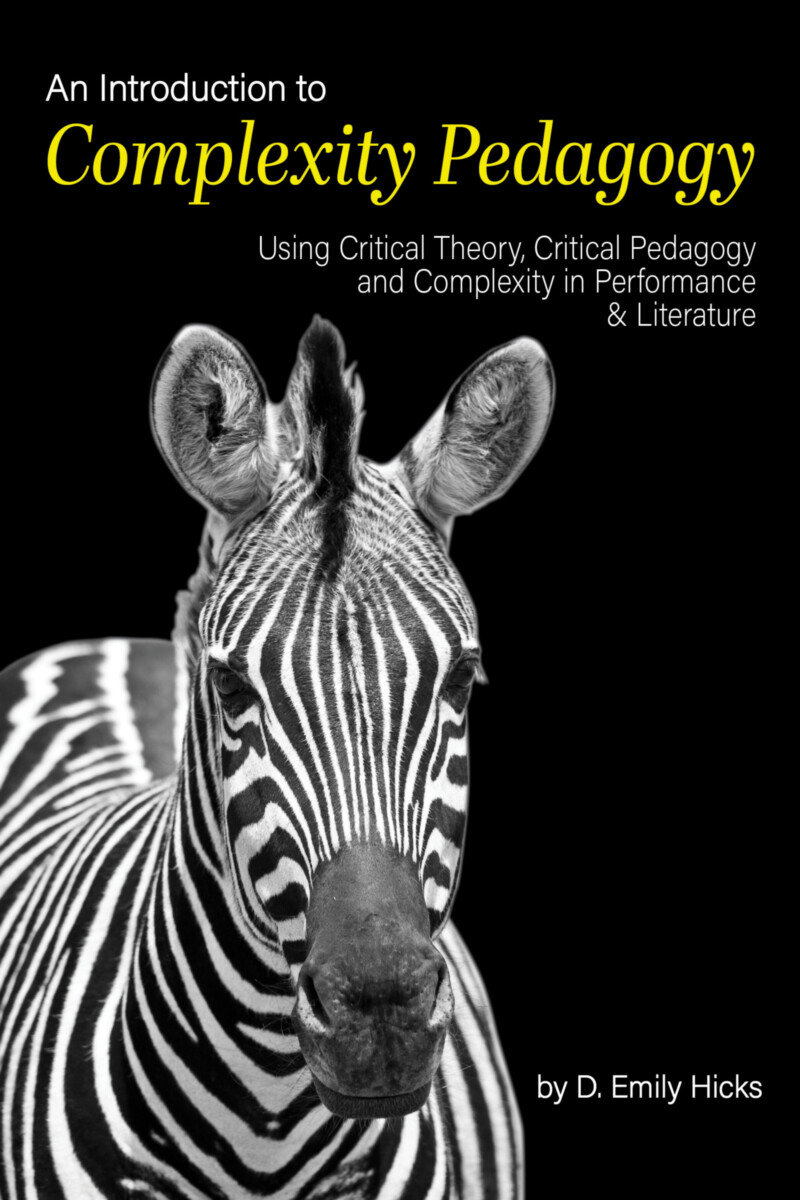 An Introduction to Complexity Pedagogy

An Introduction to Complexity Pedagogy: Using Critical Theory, Critical Pedagogy and Complexity in Performance and Literature offers readers an introduction to the basic concepts of complexity science and how they might be applied in the teaching of composition, creative writing, performance, and literature.

The book builds on Critical Theory (defined as Frankfurt Theory) and border theory, serving as a critique of neoliberalism in higher education and the teaching of critical thinking as a set of skills. Individual chapters are devoted to the following artists and writers:

The strength of this book is that it concentrates on the teaching of interrelated topics: borders (including the border between the able/disabled), complexity, mixed ancestry, ability/disability, texts, and performance, using the Mexico-U.S. border as the working example of a complexity system.

The work of the five aforementioned artists and authors are used to focus on political resistance within the context of decolonialism, but there are also references to mixed ancestry populations (including Redbones) and disability issues.

This complexity frame of reference allows the reader to see and understand both the artists’ narratives and viewpoints in the dynamic relations of shorter and longer time frames. No prior knowledge of complexity science is required and ample examples of complexity-related topics-- from coral reefs to zebra stripes--are provided. The focus is on students in state universities and community college transfer students, especially first generation students and students of color, with policy implications pointing to a critique of both elite small liberal arts colleges (SLACs) and research institutions.

“D. Emily Hicks' new book, An Introduction to Complexity Pedagogy, makes important contributions to Education/multicultural education and literary studies. She presents a view of how complexity theory and what she calls the "new materialism" can be used to combat neoliberalism in higher education and dominant modes of teaching and assessing critical thinking. She demonstrates new ways to engage important issues such as climate crisis, immigration, and a wide range of other current issues, central to contemporary education and the teaching of critical thinking.”

“Performance artist, author, and teacher D. Emily Hicks crosses geophysical, gender, cultural, linguistic, and post-digital borders, shifts established academic boundaries and discovers new pathways to teaching and learning in her new work, An Introduction to Complexity Pedagogy. Join her as she embarks on a pedagogical journey that takes us into the hinterlands of meaning-making and the metropolises of theory. At a time in which teaching has come under vicious assault by forces on the right, D. Emily Hicks has created a politics of refusal and possibility that teachers can embrace with intellectual verve and creative hope.”

“If the world is non-linear why should we teach it linearly? At some point those who teach critical and complexity theory realize that their pedagogical methods are not consistent with the material they are teaching. And this undercuts our efforts and our students. Dr. Hicks has written a well-researched field guide to help those of us struggling to teach radical, critical, and complex theory in a neoliberal academy.”

Chapter Three
Anzaldúa: From the Borderlands to the Border as a Complex System

NOTE: Information subject to change up until publication date.

Emily Hicks attended the San Francisco Art Institute, UC Berkeley, the Ecole Pratique des Hautes Etudes (Paris), and UC San Diego. She received her Ph.D. in 1979 and is a professor emeritus who has taught at San Diego State University in Chicana/o Studies and English and Comparative Literature; she has also taught at UC Irvine, USC and the UABC in Tijuana, Mexico. Hicks is the author of two books, Border Writing, the Multidimensional Text, and Ninety-five Languages and Seven Forms of Intelligence: Multicultural Education in the Twenty-first Century, as well as a variety of academic articles and art reviews.