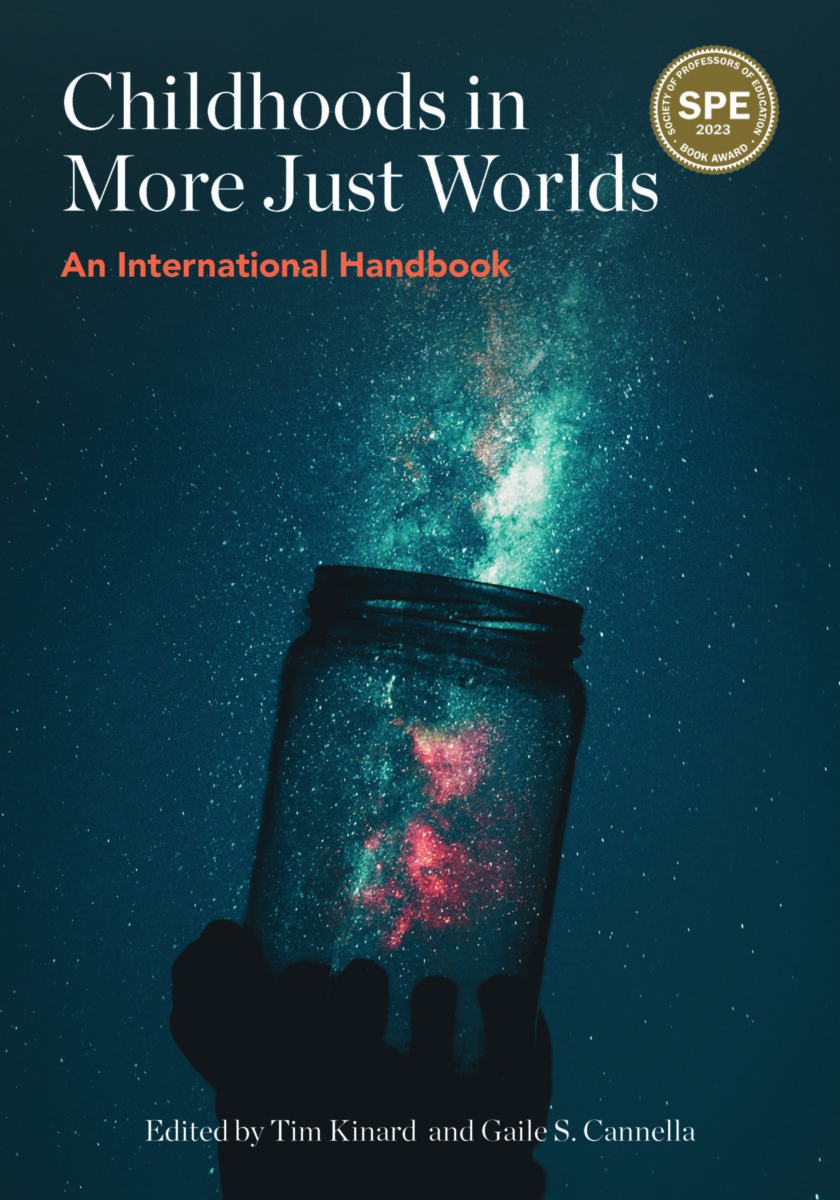 The Early Years & Youth Studies series is a set of volumes designed to focus on the multiple life experiences, forms of representation, relations, changes, and issues facing those who are identifies (usually by those who are older in years) as child or youth in the 21st Century. The content is cross-disciplinary, but unique in that each volume always folds back to direct applications for care or education. Further, while lived experience, cultural studies, and research in the social sciences have demonstrated that there is no universal childhood or human development, diversity and multiplicity remain to a large extent unrecognized. Authors are encouraged to consider one or more of the following: children and youth as diverse being and becomings in the 21st Century (e.g. childhood and youth studies after 50 years of the critique of human development, hybrid and indigenous childhoods, youth as refugee and immigrant entanglements, transgendered childhoods); complexities of being young in the digital age (e.g. bullying, digital identities, use of media by those who are younger); critical pedagogies (e.g. of affect, of collective activism, social justice, environmental justice, with or of the more-than-human like forest pedagogies, youth and critical animal studies,. educational practices that avoid human/non-human and curricular dualisms); and/or activist movements and public policy (e.g. youth activism, parent activism to counter neoliberal education, research methods and practices directly employed to impact childhood public policy). Three types of manuscripts are considered. Regular Book length, basic complete coverage of a complex topic; 21st Century Guide – 75-100 page intro book, with authors encouraged to include a chapter illustration of a specific research study and classroom practice that demonstrates the book topic; or Handbook and/or Reader that thoroughly covers the range of work on a particular complex topic, usually larger and likely edited.

Those who are younger continue to be objects of injustice and inequity; those who are younger, people of color, females, and human beings living in poverty have never been included in equitable performances of justice, care, respect, and fairness.

The authors in this international volume use existing social values and institutions--and the strengths of these varied perspectives--to address justice in ways that have not previously been considered. The aim is to create more just worlds for those who are young--as well as for the rest of us.

The first set of chapters, Bodies, Beings, and Relations in More Just Worlds, place at the forefront the lives of those who are younger who are commonly situated in positions of invisibility, disqualification, and even erasure. In the second section, Performances of Care and Education for More Just Worlds, the authors acknowledge that needed (re)conceptualizations of those who are younger, along with appreciation for human diversity and entanglements between the so-called human and nonhuman worlds, are the foundations for more just care and education environments. From the critique of neoliberal reform discourses to reconceptualizing human relations with nonhuman animal and material worlds, care and learning environments are rethought. The set of chapters in the final section, Stir of Echoes: 20th Century Childhoods in the 21st, take-up the 20th century critical concerns with constructions of “child” that have dominated and continue to govern perspectives imposed on those who are younger. Suggestions for becoming-with those who are younger through resources like reconceptualist scholarship, Black and Indigenous Studies, and various posthuman perspectives are provided throughout.

Whatever the emphasis or focus of a section or chapter, throughout the volume is the recognition that dominant discourses (e.g. neoliberal capitalism, conservativism, progressivism, human exceptionalism) and the policies they create (and that facilitate them), influence possibilities for, and limitations to, more just childhood worlds. Therefore, each section includes chapters that address these complex discourses and policy issues. The reader is invited to engage with these complexities, to become-with the various texts, and to generate unthought possibilities for childhoods in more just worlds.

“This is a timely and important book. The contributions take up the critical task of inquiring into what it might look like to centre justice in the worlds and worldings of young children in current times of intensified and unevenly distributed precarity. Rather than working with an already-known and universalized meaning of justice, the book powerfully illustrates how confronting the impacts of neoliberal capitalism, colonialism and human exceptionalism on 21st Century childhoods can occur through situated, socio-culturally attuned accounts that attend closely to the places and spaces of childhood becomings.”

“This timely and evocative volume traces how historical, political, and developmental discourses continue to influence how we mobilize justice, equity, and care in the lives of young children across the globe. Through its analysis of research, policy, and practice, I was reminded that we (as adults) limit children’s capacity to act on their world(s), even in contemporary activist movements. In our effort to advocate for children’s rights, we potentially diminish their capacity to move along and with us as collaborators and contributors to a more just world. As authors argue, without new and expanded thinking on the most pressing social issues—(im)migration, emotional well-being, colonization, sustainability, neoliberal politics—we potentially reify the conditions that create inequitable systems and boundaries. That is, caring for children is not about protecting children or using them as props for our own political agendas, but deeply understanding their entanglement with adults, the material world, nonhuman creatures, and our global communities.”

Bodies, Beings, and Relations in More Just Worlds
1. The Reduction of Children to “Bare Life”: The Case of Child Migration
Michael O’Loughlin and Renata de Assis

2. “Forward to No Place at All”: Forceful Migration and Child Welfare
Mlado Ivanovic

6. Competing Discourses about Immigrant Children: Metaphors of the Right and Left
Theodora Lightfoot

9. Sitting With the Agency Paradox to Stand for Childhood Liberation: The Case of Critical Mathematics Education
José Martínez Hinestroza

10. “Your Children Are Having Too Much Fun”: Teaching Literacy With Radical Hope
Luz A. Murillo

Stir of Echoes: 20th-Century Childhoods in the 21st
14. Figurations of the Child in Swedish Early Childhood Education
Therese Lindgren

16. Playing With the Politics of Play
Sue Grieshaber and Sally Barnes

Tim Kinard is an associate professor of early learning in the Department of Curriculum & Instruction at Texas State University in San Marcos, Texas, where his work as a researcher is entangled with his work as a teacher. A unique collaboration with the local, public school district in San Marcos has created a space where Tim and his colleagues engage with a community of practitioners, administrators, students and local families, while designing curricula and teaching with/in a public prekindergarten as engagement with complicated conversations about conquest and curriculum, theory and practice. This ongoing research collaboration and teaching opportunity were created to explore the promises and
perils of play-based, place-based, multilingual curriculum and pedagogy. Publications emerging from this collaboration have appeared in a range of journals including New Educator, Theory into Practice, Young Children and the International Journal of Qualitative Studies in Education, as well as in a book he co-authored with Jesse Gainer and Mary Esther Huerta, entitled Power Play: Explorando y Empujando Fronteras en Tejas, through theory building and storytelling in a multilingual play-based early learning curriculum.

Gaile S. Cannella is an independent scholar who has served as a tenured Full Professor at Texas A&M University, College Station, and at Arizona State University, Tempe, as well as the Velma Schmidt Endowed Chair of Education at the University of North Texas. Her work has appeared in a range of journals and volumes, including Qualitative Inquiry, Cultural Studies - Critical Methodologies, and International Review of Qualitative Research. Her most recent books are: Critical Qualitative Research Reader (2012) with Shirley Steinberg; Reconceptualizing Early Childhood Care and Education (second edition 2018) with Marianne Bloch and Beth Swadener; Critical Qualitative Inquiry: Foundations and Futures (2015) with Michelle Pérez and Penny Pasque; and Critical Examinations of Quality in Childhood Education and Care (2016) with Michelle Pérez and I-Fang Lee. She is currently working on research projects that include: early years critical perspectives in education, and critical qualitative inquiry as public activisms and unthought imaginary. Dr. Cannella received the 2017 Reconceptualizing Early Childhood Education and Care Bloch Career Award.