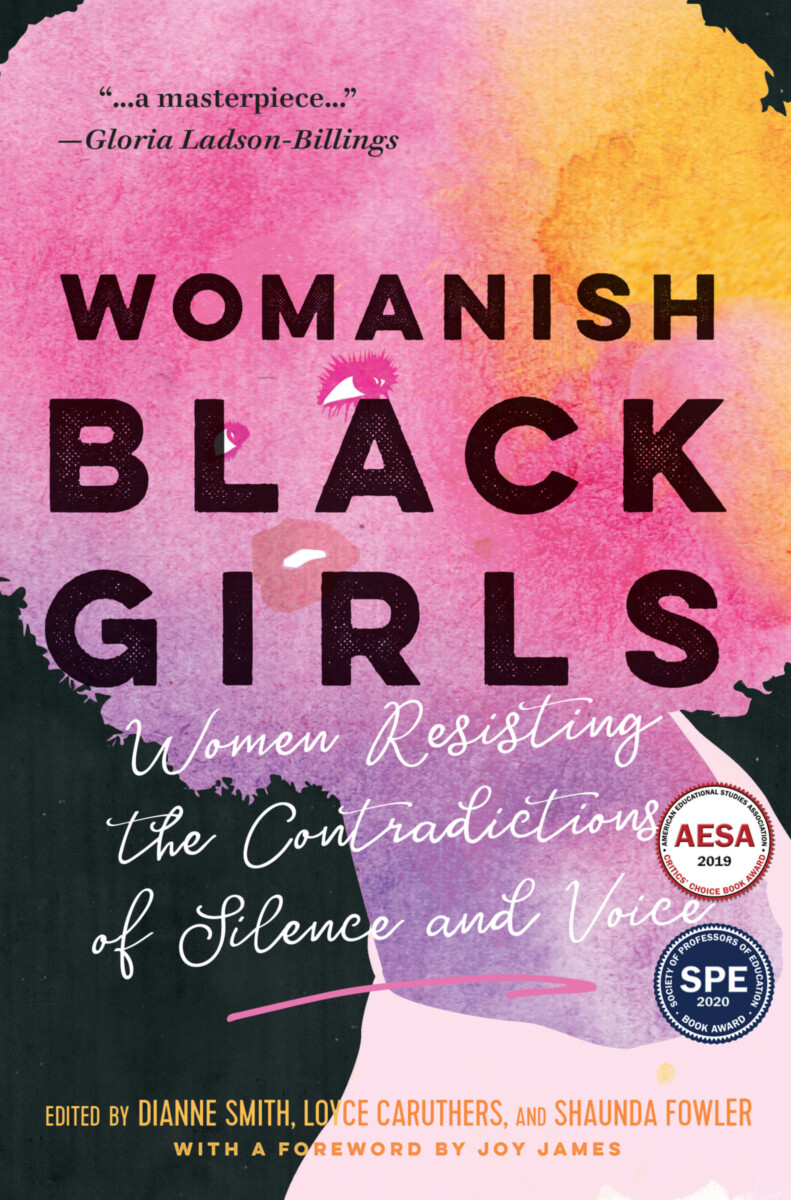 Women Resisting the Contradictions of Silence and Voice

Womanish Black Girls/Women Resisting Contradictions of Silence and Voice is a collection of essays written by varied black women who fill spaces within the academy, public schools, civic organizations, and religious institutions. These writings are critically reflective and illuminate autobiographical storied-lives. A major theme is the notion of womanish black girls/women resisting the familial and communal expectations of being seen, rather than heard. Consequently, these memories and lived stories name contradictions between “being told what to do or say” and “knowing and deciding for herself.” Additional themes include womanism and feminism, male patriarchy, violence, cultural norms, positionality, spirituality, representation, survival, and schooling. While the aforementioned can revive painful images and feelings, the essays offer hope, joy, redemption, and the re-imagining of new ways of being in individual and communal spaces. An expectation is that middle school black girls, high school black girls, college/university black girls, and community black women will view this work as seedlings for understanding resistance, claiming voice, and healing.

"The authors of Womanish Black Girls: Women Resisting the Contradictions of Silence and Voice present counter-stories that reclaim and affirm Black girls’/women’s ways of being that historically have been life-threatening. The book opens with a foreword from Joy James, who succinctly notes in echo of Audre Lorde (2017) that 'this anthology works against betrayals of captive maternals to assert democratic cultures and dignity as universal rights that belong to Black girls/women' (p. xii). The editors open the book with recollections of their own 'womanish' girlhoods, setting the stage for the various contributors in the subsequent sections. Though the foci of the authors vary, along with their interpretation of being 'womanish,' there is tight alignment in the assertions of Black women’s voicelessness and the journey towards reclaiming it. Undeniably, the included chapters were chosen with great care, creating a mosaic of experiences, intellect, and introspection that promote the importance of critical reflectiveness." (Read full review HERE.)

“In the #MeToo Era, Tarana Burke, Anita Hill, Alicia Garza, Patrisse Cullors, Opal Tometi, and so many other Black women have been ignored, forgotten, and erased. This volume reminds us that it was Black women who led and continue to lead the nation—indeed the world—toward human freedom and liberation. This volume is a masterpiece that belongs on the shelves of EVERY Black woman and anyone who claims to care about justice!”

"Womanish Black Girls opens the door for us to ask ourselves as advisors; are our students feeling safe to be who they are in our institutions of academia and in our individual offices? How can we look at our own stories, as individuals and institutions, to further understand the impact our cultural and institutional stories have on our students today?" (Read the full review at NACADA 2019 Book Reviews)

“Womanish is powerful and enlightening. This collection of life stories and essays by Black Women addresses seminal issues of autonomy, safety, visibility, freedom of expression, microaggression, sexuality, and the intersection of gender and race. The chapter on abortion is riveting. These stories are not often publicly written. The pain and shame which can accompany the decision to end a pregnancy is explored in poignant detail. Shared secrets, held in silence for so long, provide a powerful stimulus that will support the individual growth of many Black Women. Other readers will profit from understanding the experiential roots of differences women have concerning the expression of personal power in this society.”

“The hard- hitting truths that emanate from this text shake the spirit and the mind in profound ways. Uncovering the testosterone infused structures of religiosity and in particular the Black church, that have silenced and marginalized Black women for so many years, is not only ably handled in this text but also demands a visceral, intellectual, and spiritual response to this hegemonically propagating oppression from the reader. Kudos to Gloria Anderson for demystifying the iconic “First Lady” position in the church and celebrating the liberty true spiritual engagements bring to one’s genuine life.
It is insufficient to say that Womanish Black Girls/Women Resisting the Contradictions of Silence and Voice makes the reader think. More the case, is that the text causes the reader to recalibrate one’s thinking and to engage in the self-reflective act of locating the times and spaces where one has participated in marginalizing and silencing the voices of the Black woman and to then cease and desist.”

“Never has it seemed more poignant for women to reveal their stories. To name their life experiences. To bring to light their truths in order to make them real. The women who contributed to this book, all “re-searchers,” have chosen to tell their stories because to leave them untold, unclaimed, is to dismiss some of the most important, if painful, moments of their lives. These truths, rising in a collective voice, will resonate across social groups. As we nurture the next generation of young women, stories such as these will serve as a lighthouse amidst the stormy seas of becoming.”

“Simply amazing! Womanish Black Girls/Women Resisting the Contradictions of Silence and Voice is wonderfully written. Although I am of the opposite sex, I relate to a few of the phenomena such as being transparent in the classroom as noted by Valerie Tucker. I, too, can remember being scolded for acting grown or, as documented within the manuscript, as acting mannish/womanish. I posit that being what my culture perceives as mannish is what I credit to have influenced my success, as noted by Ms. Tucker, who stated that “My womanish ways gave me the strength to move forward and I worked to improve my community.” The text underscores the many challenges of being a black woman in America; stemming from negative stereotypes, insinuations of pretending to be white by obtaining a quality education, and gender oppression. The book presents powerful phenomena deserving of exploration.”

“Womanish Black Girls/Women Resisting the Contradictions of Silence and Voice is an excellent book describing the life stories of Black women and the phenomenon of growing up “womanish.” Although the voices and stories from these Black women are different, their collective voices echo so many stories of women (and men), who once felt scared or ashamed to tell their story and make their voices heard.”

Part I: Silencing Voice and (In)Visibility as Black Girls/Women

1. Dare to Break the Silence: My Mother, Myself
Loyce Caruthers

3. My Name Is NOT Pastor’s Wife: A Liberating Journey from a Voiceless Self
Gloria T. Anderson

4. My Soul Looks Back and Wonders How I Got Over: A Womanish Black Girl Reclaiming Her Superpower
Shaunda Fowler

9. Educated Black Women as Conscious Resisters: How Our Mother’s Love Made a Way
Iesha Jackson and Trachette L. Jackson

Dianne Smith is Professor Emerita in Educational Leadership, Policy, and Foundations, School of Education, University of Missouri-Kansas City. Her work focuses on race/racism, womanist/feminist theory, critical educational theory, and curriculum theory. She has served as a visiting scholar at the University of Western Cape and Nelson Mandela University (formerly University of Port Elizabeth), both in South Africa. She is a past president of American Educational Studies Association. And, she has always imagined being beamed up by Scotty!

Loyce Caruthers is a Professor and Chair of Educational Leadership, Policy and Foundations at the University of Missouri-Kansas City, and has been with UMKC since 2001 where she teaches courses to prepare school administrators and qualitative research methods for doctoral students. Loyce also serves as the Coordinator of the Ed.D Education Administration Program. Loyce’s research involves the use of voice through narrative and critical race theory for exploring phenomena related to race, class, gender and other differences that may influence educators’ beliefs and perceptions, and ultimately their work in schools. Recent publications include a co-authored book, Great Expectations: What Kids Want from Our Urban Public Schools. She is engaged in a collaborative project, Kansas City Speaks: Stories of School Desegregation, a website to share stories of school desegregation through oral histories, artifacts, archival documents, and images made accessible to the public with a community yearbook feature and lesson plans for educators.

Shaunda Fowler was born and raised in Compton, California and spent a significant portion of her life with her maternal grandparents in the Imperial Courts Projects (PJs) in Watts. Growing up in the inner-city, she learned that being womanish was a way of survival. It is her hope that girls/women of color will be brave enough to have courageous conversations about being womanish in order to heal old wounds and find joy. Dr. Fowler is a middle school principal in a small mid-western school district where many of the girls of color can be considered womanish.