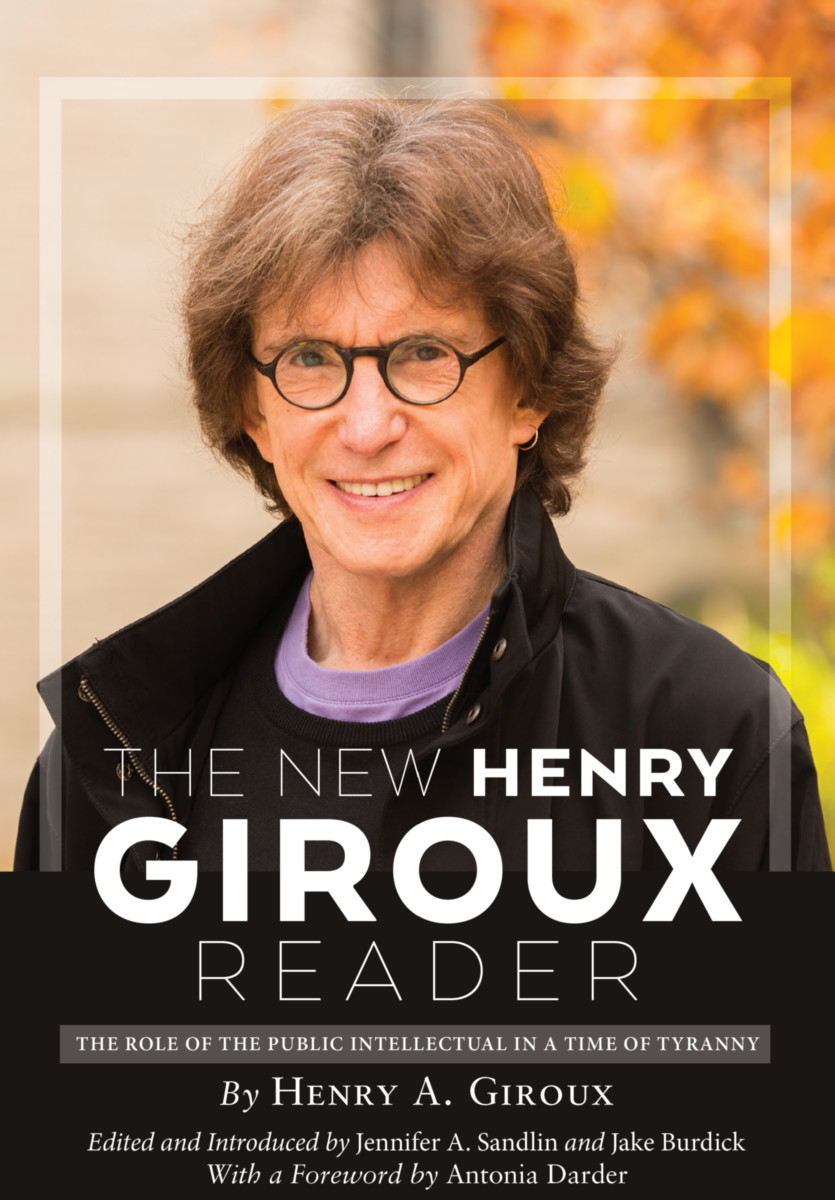 The Role of the Public Intellectual in a Time of Tyranny

The New Henry Giroux Reader presents Henry Giroux’s evolving body of work. The book articulates a crucial shift in his analyses after the September 11th, 2001 terrorist attack, when his writing took on more expansive articulations of power, politics, and pedagogy that addressed education and culture in forms that could no longer be contained via isolated reviews of media, schooling, or pedagogical practice. Instead, Giroux locates these discourses as a constellation of neoliberal influences on cultural practices, with education as the engine of their reproduction and their cessation.

The New Henry Giroux Reader also takes up Giroux’s proclivity for using metaphors articulating death as the inevitable effect of neoliberalism and its invasion of cultural policy. Zombies, entropy, and violence permeate his work, coalescing around the central notion that market ideologies are anathema to human life. His early pieces signal an unnatural state of affairs seeping through the fabric of social life, and his work in cultural studies and public pedagogy signals the escalation of this unease across educative spaces. The next sections take up the fallout of 9/11 as an eruption of these horrific practices into all facets of human life, within traditional understandings of education and culture’s broader pedagogical imperatives. The book concludes with Giroux’s writings on education's vitalist capacity, demonstrating an unerring capacity for hope in the face of abject horror.

"Professor Giroux's thinking touches on the sciences of education, the sociology of education, studies on youth, cultural policies, critical pedagogy, cultural and media studies. A versatile thinker, Mr. Giroux remains eminently critical of the excesses of our education systems, criticizing American universities for giving too much importance to the requirements of different external pressure groups when determining the content of programs and courses, from primary to higher education. This tendency is even found in the descriptions of the profiles sought for possible rectors or presidents of universities." (Click here to read the full review.)

"Henry Giroux is one of the most preeminent (and prolific) cultural theorists of neoliberalism, investigating the most urgent issues of our contemporary world, not only through the lens of moral outrage about what is happening to the planet and the people, but with a razor-sharp intellect that recognizes our extraordinary times requires new ways of understanding, not just the rehashing and reworking of old concepts for a different world. When Gramsci’s “optimism of the will” becomes active, it will be because Henry Giroux’s “pessimism of the intellect” has provided us with the conceptual tools to become democratic citizens. This collection, spanning Giroux’s entire career, shows the scope and depth of what real intellectual work looks like. If we are to avoid the suicidal consequences of neoliberal capitalism it will be because of the belief in public pedagogy that writers such as Giroux embody. His hope for another world is organically part of his intellectual project, not just an abstract wish."

"The connections between power, politics, and education can be elusive at times, which is intentional by the powers that be. But Giroux has never been fooled or scared to make the connections that explain power and the injustice inflicted on the most vulnerable. Giroux’s body of work is clear, concise, razor sharp, and aimed at not only examining power, but also its impact on human life. The New Henry Giroux Reader is indispensable for anyone interested in understanding and undoing this American horror story we are all living."

"These are times when public intellectuals of the caliber of Henry Giroux are much needed and unfortunately quite rare. This is a timely book, superbly edited, and cleverly organized, not to please readers with niceties and wishful thinking, but to engage with difficult ideas and encourage reflections and actions to resist and change. Giroux has an uncanny ability to walk the critical tightrope required to simultaneously point to the terror and violence of contemporary societies while providing ideas and metaphors that could make many readers uncomfortable but more importantly, hopeful. This book presents Giroux’s pioneering key texts in public pedagogy, cultural studies, youth studies, higher education, media studies, and critical theory showing his original and challenging perspectives without prescriptive nostalgia or sentimentalism. This is a book that we need to read and discuss, not in search of recipes or easy solutions, but because it will help each of us to explore our individual and social responses in these troubled times and imagine what we can do to more effectively assume our responsibilities as teachers, students, citizens, and activists."

“For four decades, Henry Giroux has transformed our understanding of politics, culture, and education. Throughout his career, he has founded critical pedagogy, brought cultural studies into education, transformed our understanding of the neoliberal and authoritarian remaking of K12 and Higher Education, and provided a powerful vision for the emancipatory struggle over contemporary institutions, the public sphere, and civil society. By emphasizing the pedagogical dimensions of culture and politics, Giroux’s work highlights the centrality of learning for forging people’s capacities to exercise democratic self-governance. At the current historical juncture, with rising authoritarianism, the dangerous decline of democracy, neoliberal cultures of cruelty, resurgent positivism, White supremacy, and technocratic control, Giroux’s body of scholarship and public intellectual engagement creatively offers trenchant analyses and new theoretical tools to comprehend and impact the social world. Giroux’s work is exactly what we need in the quest for a more democratic, just, and hopeful future.”

Henry Giroux and the Enduring Spirit of Resistance
Peter McLaren

Radicalizing Hope: Public Intellectualism, the Vitalism of Education, and the Promise of Democracy
William Ayers

SECTION I: Social Theory and the Struggle for Pedagogies: Sociology of Education, Critical Pedagogy, and Border Pedagogy

1. Theories of Reproduction and Resistance in the New Sociology of Education: A Critical Analysis

2. Border Pedagogy in the Age of Postmodernism

3. Doing Cultural Studies: Youth and the Challenge of Pedagogy

4. Public Pedagogy and the Responsibility of Intellectuals: Youth, Littleton, and the Loss of Innocence

5. Breaking into the Movies: Pedagogy and the Politics of Film

SECTION III: Neoliberalism and the Phantasmagoria of the Social: Post-9/11 Politics, the Decline of the Public Sphere,
and the Decay of Humanity

6. Neoliberalism and the Disappearance of the Social in Ghost World

8. The Terror of Neoliberalism: Rethinking the Significance of Cultural Politics

9. White Nationalism, Armed Culture and State Violence in the Age of Donald Trump

SECTION IV: No Way Out: The Devouring of Higher Education

10. Vocationalizing Higher Education: Schooling and the Politics of Corporate Culture

11. Youth, Higher Education and the Crisis of Public Time: Educated Hope and the Possibility of a Democratic Future

12. The Militarization of U.S. Higher Education after 9/11

SECTION V: Radicalizing Hope: Public Intellectualism, The Vitalism of Education, and the Promise of Democracy

13. Democracy, Freedom, and Justice after September 11th: Rethinking the Role of Educators and the Politics of Schooling

14. Cultural Studies, Public Pedagogy, and the Responsibility of Intellectuals

15. Gated Intellectuals and Fortress America: Towards a Borderless Pedagogy in the Occupy Movement

17. Charlottesville, Neo-Nazis and the Challenge to Higher Education

About the Author, Editors, and Contributors

Henry A. Giroux currently holds the McMaster University Chair for Scholarship in the Public Interest in the English and Cultural Studies Department and the Paulo Freire Distinguished Scholar Professorship in Critical Pedagogy. In 2002, he was named as one of the top fifty educational thinkers of the modern period in Fifty Modern Thinkers on Education: From Piaget to the Present as part of Routledge’s Key Guides Publication Series. In 2007, he was named by the Toronto Star as one of the “12 Canadians Changing the Way We Think.” He is a frequent contributor to online sources such as Truthout, Tikkun, CounterPunch, Truthdig, and Salon, and his research has appeared in numerous academic journals. In all, he has published over 400 scholarly articles. His most recent books include Neoliberalism’s War on Higher Education (Haymarket, 2014), The Violence of Organized Forgetting (City Lights, 2014), Dangerous Thinking in the Age of the New Authoritarianism (Routledge, 2015), America’s Addiction to Terrorism (Monthly Review Press, 2016), America at War with Itself (City Lights, 2017), The Public in Peril (Routledge, 2018), and The Terror of the Unforeseen (Los Angeles Review of Books, 2019). Giroux is also a member of the Board of Directors at Truthout. His website is www.henryagiroux.com.

Jennifer A. Sandlin is a professor in the Justice and Social Inquiry Department in the School of Social Transformation at Arizona State University, where she teaches courses on consumption and education, popular culture and justice, and social and cultural pedagogy. Her research focuses on the intersections of education, learning, and consumption; as well as on the theory and practice of public pedagogy. She also investigates sites of public pedagogy and popular culture-based, informal, and social movement activism centered on “unlearning” consumerism. She is currently co-editor of Journal of Curriculum and Pedagogy. Her work has been published in Journal of Consumer Culture, Adult Education Quarterly, Qualitative Inquiry, International Journal of Qualitative Studies in Education, Curriculum Inquiry, and Teachers College Record. She recently edited, with Jason Wallin, Paranoid Pedagogies (Palgrave, 2018); with Julie Garlen, Disney, Culture, and Curriculum (Routledge, 2016) and Teaching with Disney (Peter Lang, 2016); with Jake Burdick and Michael O’Malley, Problematizing Public Pedagogy (Routledge, 2014); with Brian Schultz and Jake Burdick, Handbook of Public Pedagogy (Routledge, 2010); and with Peter McLaren, Critical Pedagogies of Consumption (Routledge, 2010).

Jake Burdick is an assistant professor of Curriculum Studies in the College of Education at Purdue University, where he teaches courses in curriculum theory, multicultural education, and qualitative inquiry. Jake’s research centers on deepening conceptualizations of education via public pedagogy and theorizing activism as a pedagogical performance. Jake is the co-editor of the Handbook of Public Pedagogy (Routledge), Complicated Conversations and Confirmed Commitments: Revitalizing Education for Democracy (Educators International Press), and Problematizing Public Pedagogy (Routledge). He has published work in Qualitative Inquiry, Curriculum Inquiry, Review of Research in Education, Review of Educational Research, and the Journal of Curriculum and Pedagogy.