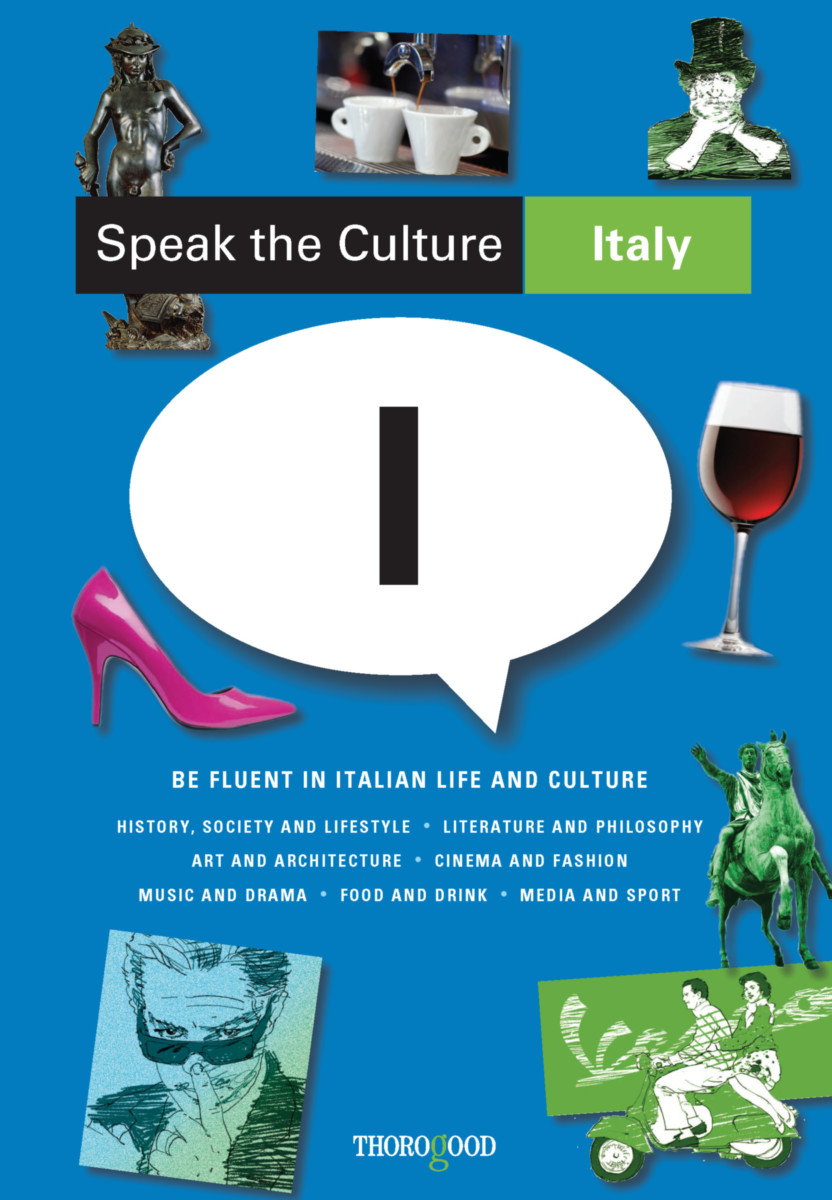 The Italian character is complex, contradictory, alluring and infinitely variable: heirs to the greatest empire of the ancient world but almost ungovernable; cradle of western civilization as well as the Mafia; maestros of modern design, mired in old-fashioned bureaucracy; epicentre of the Catholic Church and exemplars of la dolce vita.

Where do you start? Giotto? Caravaggio? Murky Etruscan tombs or the mighty Roman Pantheon?

Speak the Culture: Italy sifts through a sprawling 3,000 year saga and makes sense of it, dissecting architecture, music, food, art, literature, cinema, family and much more.

Culture is covered in its broadest sense, extending into every aspect of Italian life—food and drink, religion, politics, sport, manners, character and so on. While the Italian peninsula has its ancient history, it’s been a unified nation for less than 150 years. Lo Stivale, or the famous Boot, is young: the nuances of strong, surviving regional identities are important and revealed.

Taken as a whole, Speak the Culture: Italy gives you an insight into what it means to be Italian, but it’s also a book to dip into, to learn, for instance, about Giuseppe Verdi, Sophia Loren or Umberto Eco. Easily read and beautifully illustrated, this, the fourth in the Speak the Cultureseries, offers an intimate understanding of Italian life and culture for new residents, second home-owners, holidaymakers, business travelers, students and lovers of Italy everywhere.

"Speak The Culture: Italy is part of a new series of Travel Guides from Thorgood Press, and I am very impressed with it. These guides go beyond the typical guidebook usages which tell where to eat and what to do and how to get around. In these guides you will find fascinating insights in the the events, people, and things that have happened within each country which helped shape the country, its history, its government, its culture, and its people. You will learn all about traditions, significant happenings through the years, important art, literature, music, cinema, architecture, and all about the people and their customs. The discussions of the culture extend into every aspect of life and tell you how to best enjoy these aspects when you visit the country. This really interesting, readable, and beautifully illustrated series gives a great insight for people who travel, live, or do business there . It is really a book to pour over again and again and a good reference for all things Italian. Others in the series include Britain, France, Spain, and Germany and others will be added.

"Speak the Culture is a wide-ranging and accessible exploration of the cultural forces and figures that have shaped Italy. Featuring the defining movements, facts and figures from the country's past and present in literature, film, music, media and more besides, Speak the Culture aims to get you fluent in Italian life and culture."

"There's more to Italy than a bunch of gods and Spaghetti. Speak the Culture: Italy is a crash course in Italian culture in Thorogood's Speak the Culture series, giving a deeper insight into the substance of the Italian people than simply their language. From their historical icons to their modern pop culture, Speak the Culture is an insightful read for anyone who wants a better grasp of Italian culture or who wants to visit the country without the big glowing neon tourist sign over their head."

"Readers will come away with the basics on everything from Italy's Roman origins to the Risorgimento, the trallaleri singers of Genova, neo-realist film, Lega Nord and mamma's boys. The test is straightforward and entertaining while managing to stay unbiases and egalitarian. Astute, intelligent, fun. Speak the Culture will help sort through the complex and complicated and put you on the path to cultural fluency whether you've been in Italy a week, a year or a lifetime."

"Speak the Culture: Italy is a gem... With sharp, crisp writing, it's easy to read. The sidebars on almost every page provide bite-sized morsels of information about Italy that have I-didn't-know-that appeal.... If you are only going to read one book on Italy this year Speak the Culture: Italy is worthy considering. It's entertaining, informative and a page turner for both newcomers to Italy and old hands."

"Speak the Culture provides a rare insight on Italian life, culture and society. Rather remarkably, it also avoids most of the stereotypes that often plague efforts of this kind."