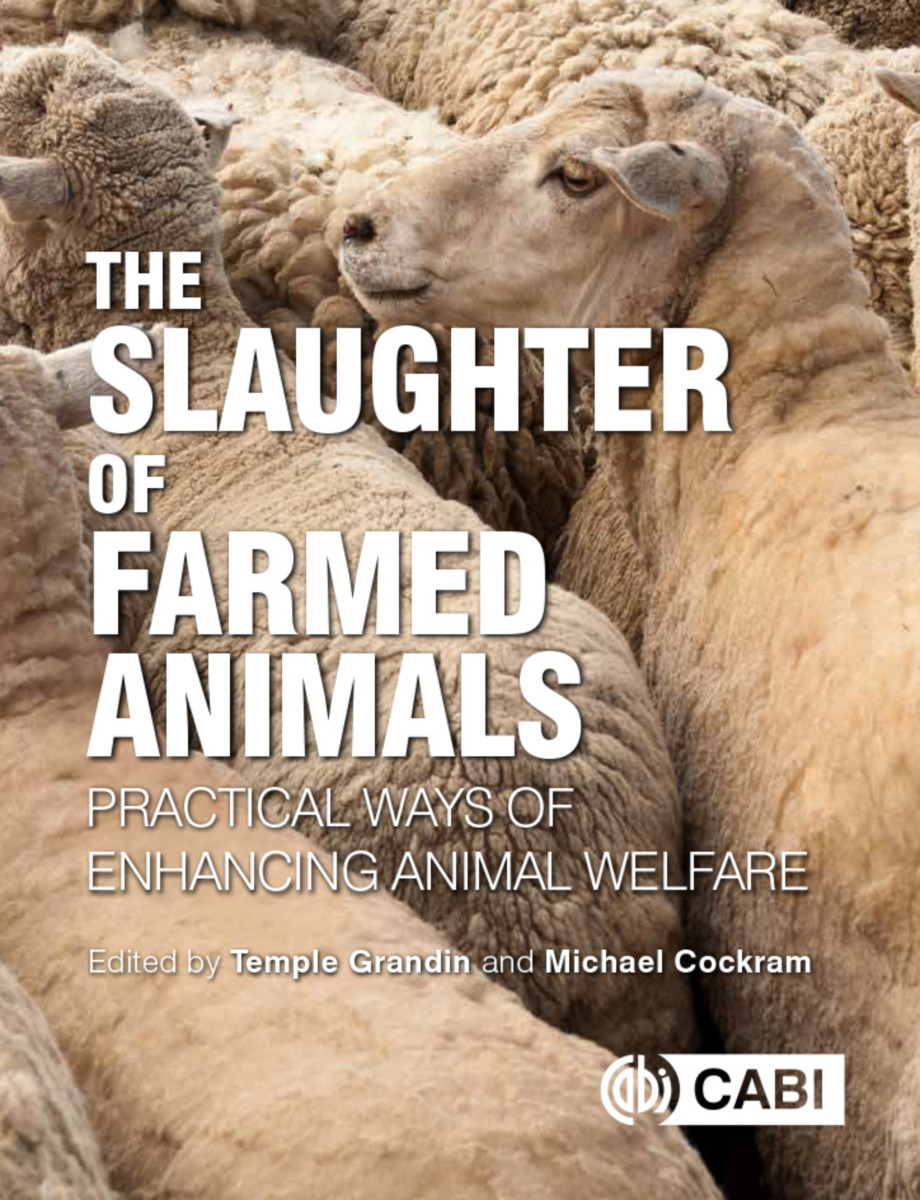 The Slaughter of Farmed Animals

From philosophical and ethical views on the slaughter of farmed livestock, to the intensely practical guidelines that need to be put in place to maximize animal welfare, this book provides a balance between evidence-based, scientific studies and down to earth practical advice. It is an important publication for government and private industry managers, veterinarians and animal welfare practitioners who will be implementing improvements in the humane slaughter of livestock throughout the world.

1: Introduction to Livestock and Poultry Welfare at Slaughter—Temple Grandin

4: Condition of Animals on Arrival at the Abattoir and Their Management During Lairage—Michael Cockram

5: Bruises on Livestock and Methods to Prevent Them—Lily Calloway-Edwards and Helen Kline

9: Stunning Pigs and Sheep with Electricity or CO2—Temple Grandin

10: Basics of Captive Bolt Stunning of Cattle and Other Animals—Faith Baier and Dennis Wilson

11: Religious Slaughter and How to Improve Welfare During Both Kosher or Halal Methods—Temple Grandin and Erika Voogd

12: Auditing and Assessing the Welfare of Livestock and Poultry During Preslaughter Handling and Stunning—Temple Grandin

14: The Physiology of the Brain and Determining Insensibility and Unconsciousness—E.M. Claudia Terlouw

16: The Use of Abattoir Data to Provide Information on the Welfare of Livestock on the Farm and During Transport—Temple Grandin and Michael Cockram

17: Approaches to Legislation and Enforcement to Minimize Welfare Issues at Slaughter—Michael Cockram

18A: Animals Rights Viewpoint: The Abuse of Animals Won’t Stop Until we Stop Eating Meat—Peter Singer

18B: Ethical Defense of Eating Meat: The Place for Meat in the Diet—Frederic Leroy, Miki Ben-Dor and Frank M. Mitloehner

18e: Animal Welfare Viewpoint - My Thoughts on Use of Animals for Food—Temple Grandin

Michael Cockram is a Professor at the Atlantic Veterinary College, University of Prince Edward Island, Canada where he is the Chair in Animal Welfare, at the Sir James Dunn Animal Welfare Centre. Dr. Cockram has a veterinary and academic background in animal welfare. He obtained his veterinary degree and PhD in the UK and then worked at the University of Edinburgh. He studies the welfare implications of the management of animals, and the relationships between health, physiology, behavior and animal science. He has published research on the transport, lairage and handling of livestock and poultry, and other animal welfare issues. Much of this research was conducted within commercial slaughter plants. He has worked with industry groups to apply the results of scientific research to commercial situations and has participated in the development of several animal welfare codes of practice. His previous book chapters have been on the welfare implications of health and disease, sheep transport and the effects of handling, transportation, lairage and slaughter on cattle welfare and beef quality. Dr. Cockram serves as the Welfare and Behavior Section Editor for Animal: An International Journal of Animal Bioscience; he organized the 2018 International Congress of the International Society for Applied Ethology; and is currently the Chair of the Large Animal Subcommittee of the Canadian Veterinary Medical Association, Animal Welfare Committee.