During 30 years in human healthcare as a Registered General Nurse, Angela Garner developed a strong interest in end-of-life issues and communicating with the dying and bereaved with empathy and sensitivity. With a life-long passion and interest in animal welfare, it was a natural progression to specialize in companion animal bereavement support. Shortly after gaining her diploma in this area in 2001, she was asked to set up and run an innovative national pet bereavement support service for a small charity, called Environmental Animal Sanctuary & Education (EASE) in the United Kingdom.

Over the years Angela has developed her own unique methods of communicating with bereaved pet owners, and written a wide range of support literature on the subject, including a children’s activity book. In 2021 her first book for owners was published and is currently available worldwide. In 2012, she was awarded a Fellowship by the Society of Bereavement Practitioners in respect of her work, and in 2021 the Society presented her with their prestigious "President’s Award of Merit."

After learning to teach in the adult sector, she moved into teaching and lecturing on this subject, and has successfully presented to vet staff and animal welfare organizations. In 2015 Angela was invited to lecture at the British Equine Veterinary Association (BEVA) annual conference, the video of which can be viewed on her website: www.petlosspress.com 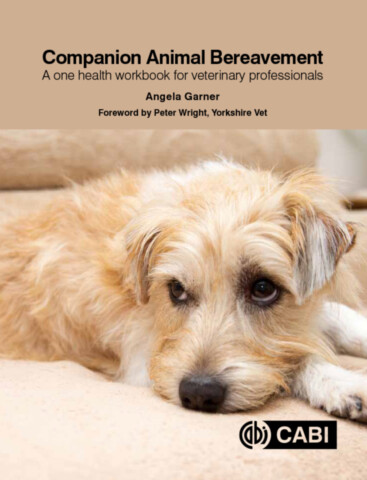 A one health workbook for veterinary professionals