Mary B. Marcy is President of Dominican University of California.

The ninth President of Dominican University of California, serving since 2011, Mary B. Marcy’s nationally recognized research focuses on small college innovation and transformation. As demographic, financial and policy shifts make the future especially unpredictable for small colleges across the country, Marcy has published and presented extensively on issues of leadership and strategy in higher education.

At Dominican, Marcy has established innovative programs and partnerships to position students for success in the 21st century. Guided by her leadership, Dominican has developed a comprehensive framework for student learning and success known as The Dominican Experience. This signature program has led to dramatic increases in both graduation and retention rates at a time when the percentage of Dominican University students identifying as ethnically diverse has increased by nearly 30 percent. 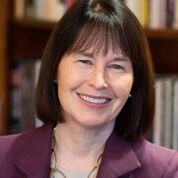