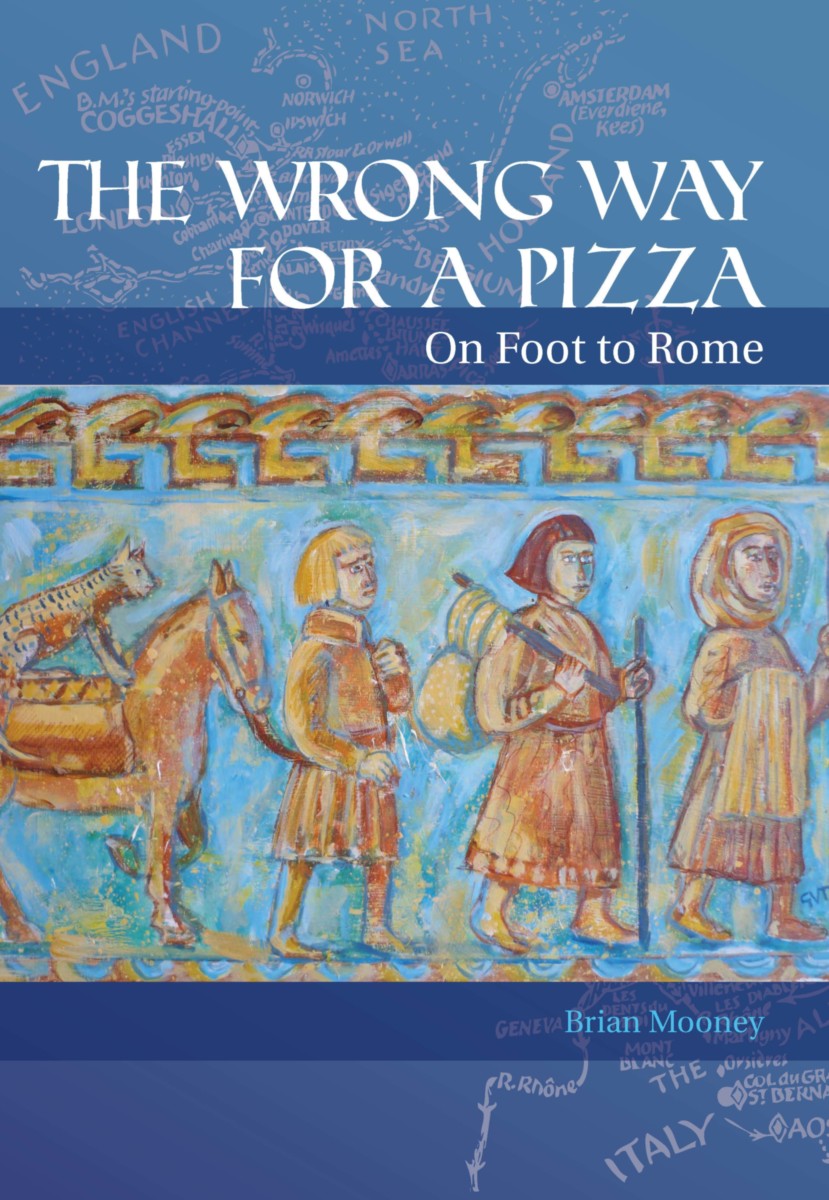 The Wrong Way for a Pizza

Author and journalist Brian Mooney was winding down after walking 1,300 miles from Coggeshall to Rome when a friend made a teasing comment: “In the old days pilgrims didn’t have the luxury of flying back. They walked home!”

The author keeps bumping into the ghosts of his outward journey. He gets used to being told by Rome-bound pilgrims that he is walking backwards, and, with the sun behind him lighting up the Tuscan landscape, he revels in different vistas and new horizons. Varying the route from his outward journey, he crosses the Alps over a high pass from Cervinia to Zermatt and makes his way across the Jura to the Doubs, and then follows the Burgundy Canal to the Yonne and Seine, and on to Paris. After a fast march to Calais and a ferry to Dover, his arrival in Canterbury is greeted by a wall of indifference, but he finds a warmer welcome in the Essex new town of Basildon, where he spends the final night of his journey – although he cannot help reflecting that Basildon is not quite the Eternal City to which he has now walked there and back.

“To travel with Brian Mooney is to enjoy the old roads, the slow lanes, and to see so much that the fast fail to see.”

Sir Peter Stothard, author of On the Spartacus Road

“Brian Mooney blazes a trail northward across Europe like the summer swallow—a most enjoyable tale filled with character and determination, worthy of Saint Augustine himself."

“Readers who enjoyed A Long Way for a Pizza, Brian Mooney’s entertaining and sharply observed account of his 2,000 kilometre journey on foot to Rome, are in for a treat with this sequel, an equally diverting and informative travelogue of the route in reverse….an absorbing read both for armchair pilgrims and for those thinking of treading in the author’s footsteps.”

Brian Mooney is a prize-winning international journalist and author of three books. He worked for Reuters for 30 years, covering events in more than 50 countries. He was nominated for a Pulitzer Prize and awarded an American Press Club Award for his work in Poland during the Solidarity Revolution. In recent years he has worked in high-profile international PR assignments in Russia, Bangladesh and India. He has published: Breaking News (Wiley), a business book about the near-collapse of Reuters; Frontier Country (Thorogood), a light-hearted account of a walk around the borders of Essex; A Long Way for a Pizza and Shaping History (Arcturus), a study of great leaders.